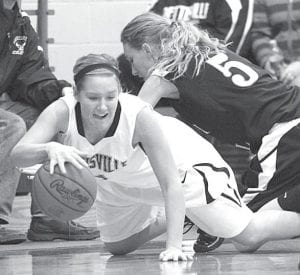 Ashlyn Bontrager battles to keep control of the ball in Pettisville’s game with Delta, Nov. 30. She scored 10 points in the Birds’ win over Edgerton.– photo by Mary Huber

The Pettisville girls basketball team was on the road twice last weekend.

Pettisville traveled to Edgerton, Saturday, Dec. 18 for a non-league contest. The Birds took control in the first half and went on to win 66- 53.

The score was tied at 11 after one period, but the Bombers took a 24-20 advantage into the locker room.

The Birds closed the gap to 31-28 after three, but Edon outscored PHS 10-6 in the fourth quarter for the sevenpoint margin of victory.

“We lacked offensive intensity tonight,” said Jason Waldvogel, PHS head coach. “We have several girls capable of being a scoring threat, but need them to step up.

“Give Edon credit. They played well.”

Tanner Hostetler led PHS with 10 points. Edon was led by Sydney Stoll and Mackenzie Eicher, each with 11.

Edgerton outscored the Birds 27-22 in the second half, but the Birds won by 13.

“That was a great team win,” said Waldvogel. “Our pressure got to them and we shot the ball well tonight.”

Kaitlin Nofziger led PHS with 15 points. Also in double figures were Hostetler with 12 and Ashlyn Bontrager with 10.