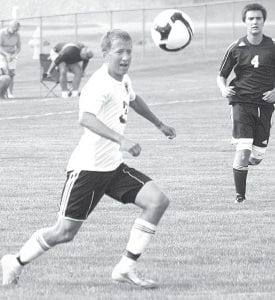 Taylor Short keeps an eye on the ball in Pettisville’s boys soccer game against Rossford.– photo by Scott Schultz

The Pettisville boys soccer team defeated Rossford 2-0 in its opening game of the season, Monday, Aug. 23, at Pettisville.

PHS hosted Continental, Thursday, Aug. 26. The squads played to a 2-2 tie. Blackbird goals were scored by Rupp, with an assist from Reyes, and Gabe Valdez.

The PHS junior varsity game ended in a 1-1 tie. Continental scored its goal early in the second half.

Andrew Mayer responded for PHS, scoring in the 61st minute with an assist from Korben Rychener.