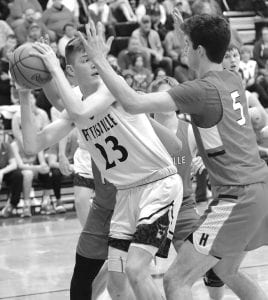 Cayden Jacoby (23) gets surrounded by a pair of Hicksville Aces under the basket.– photo by Mario Gomez

Pettisville (12-7) got all it wanted from North Central, Friday, Feb. 7, in the Bird Cage, but in the end, the Blackbirds secured their third straight Buckeye Border Conference title with a 48-42 win.

Pettisville (10-0 BBC) has two BBC games remaining. Fayette and Edon, who are tied for second place, are 6-3.

The Birds dropped two non-conference games– a road game at Evergreen, 53-43, and at home against Hicksville, 48-37.

Jack Bailey scored 10 of his team-leading 13 points in the fourth, but Pettisville outscored the Eagles 17-16 to clinch the BBC crown.

Homecoming festivities were slightly dampened as the Birds lost to the Aces (14- 6).

The first quarter was nip and tuck, with Hicksville leading 12-11 entering the second.

The Birds grabbed a brief 20-18 lead midway through the second, but the Aces scored the final six points of the quarter for a 24-20 halftime advantage.

“I thought we did a good job of being patient on some possessions and getting good looks,” said Leppelmeier.

“I thought we had the pace to the game that we wanted. We wanted to keep them out of rhythm, so I thought our offense was doing a good job of that as well as defensively at the other end.”

Jacoby scored all nine of Pettisville’s third-quarter points, but Hicksville took a 35-29 lead into the fourth.

Pettisville trimmed the lead to four, 39-35 with 3:25 left after a Jacoby free throw.

“When we needed that bucket we came down and just tried a little too hard,” said Leppelmeier.

“Too many turnovers against a great team like Hicksville. You can’t turn the basketball over that many times and expect to come out on top.”

Jacoby led all scorers with 20 points.

Pettisville traveled to Evergreen, Monday, Feb. 3, for a makeup contest.

Loeffler led all scorers with 28 points. Nate Brighton chipped in 15.

Mitchell Avina was the high man for Pettisville, scoring 18 points including four treys.

Now that tournament draws have been assigned, Leppelmeier said the focus of his team remains the same as always.

“I think our focus stays the same. We have to guard the basketball,” he said.

“We added in a zone, and I think it’s really benefited us. It gives us a couple different looks on the defensive end that we haven’t had in the past.

“We are also getting some kids back.

“We got out of flow in terms of what we had going. We were playing pretty well and then we had a few setbacks.

“We tell our guys with a loss that it needs to bring us closer together.”