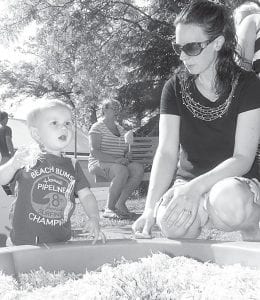 There was fun for all at the 12th annual Black Swamp Benefit, Friday and Saturday, June 14-15, at the Fulton County Fairgrounds. Top left: Trey Nafziger, 2, searches in wood shavings for treasure in the children’s activity area. His mother, Jen, looks on. They are from rural Archbold. Top right: Terry Short, auctioneer, calls for bids during the Saturday auction. In the background are the many quilts that were sold. Several went for more than $1,000 each. Bottom left: Brooke Kohler didn’t get this muddy playing in the Oozeball (mud volleyball) tournament. She dived into the mud head first to get this look. Bottom right: McKenna Lantz faceplants into the mud as well. The girls are from Archbold.– photos by David Pugh

Ron Short, chairman of the Black Swamp Benefit, said the BSB Jam, the Friday, June 14 concert, was a big success.

About 900 to 1,000 people attended the performance by three Christian music groups, and all comments were positive, Short said.

“Some were hesitant about the weather and didn’t buy their tickets until the event. They didn’t mind paying extra, because it was for the Black Swamp Benefit,” he said.

“They got their money’s worth.”

The goal of the concert was to bring in young people and a different crowd who hadn’t attended the benefit fundraiser before.

“We had no idea what to expect,” Short said.

“People came from Cleveland, from Indiana, and from Michigan. 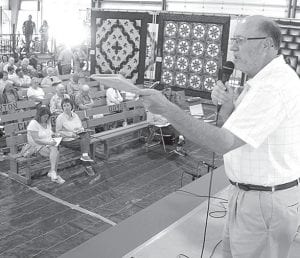 “They couldn’t keep up, they had to go out and get more milk.”

Short was complimentary of the artists who performed at the concert.

“They were very personable,” he said. “They signed autographs and talked to the kids before and after the show. They felt very comfortable here in Northwest Ohio.”

There were good turnouts for other events, including the Oozeball (mud volleyball) tournament and 5K run.

Purchasing items, then donating them back to the auction, has long been one way the Centurions Motorcycle Club, Toledo, has supported the benefit.

The club has had a relationship with the benefit, and Sunshine, Inc., for many years. 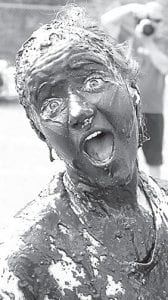 However, Short said others are starting to follow the Centurions’ example.

“People want to support the benefit, but they don’t necessarily want the items. There was a lot of re-donating,” he said.

Money raised at the benefit supports Sunshine’s local efforts and MCC, which supports many needs around the world.–David Pugh 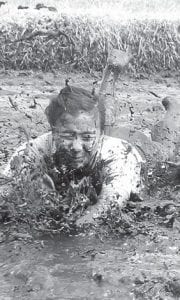 Short said financial results of the benefit were not available Tuesday morning. “We anticipate another good year,” he said. In 2012, total receipts were $141,780. At the Saturday auction, eight quilts sold for over $1,000, and several sold in the $950 range. A native oak timber bench crafted by Eldon Birkey, Archbold, sold for $1,000. An oak storage cabinet with TV trays, built by Sam Oyer in the Fairlawn Haven woodshop, sold for $700. A metal sunflower, made of old metal parts from farm equipment, was built by Arlen Schmucker, rural West Unity. It went for $500. “Black Swamp Beauty,” the feature quilt, which was the Best of Show winner at