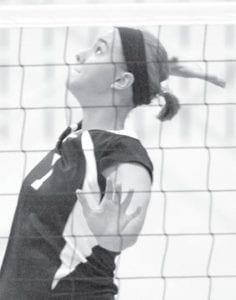 Katie Yoder goes for a spike.– photo by Mary Huber

The Birds (21-2), who were ranked 17th in the fi- nal Ohio High School Volleyball Coaches Association poll, played Edon (20-3) last night in a district semifinal at Paulding. The Blue Bombers were seeded first in the Bryan sectional.

“The girls had the goal of winning the league and winning sectionals, and they’ve done that,” said John Horning, PHS head coach. “We’ll be motivated and ready to play. We just need to execute and play our ‘A’ game.

“Today, I thought we played pretty well. Hilltop played really well. I thought defensively they put forth real solid effort. They got a lot of good swings.

“We did have some good blocks. I think we should have been a little more motivated, but we won in three.

“I think this was good for us. This was our first tournament game this season, so I think we were a little tight. We were a little hesitant sometimes, just kind of getting our feet underneath us. It had been a week since we’d played, so we were a little rusty, but overall another good team effort.

“Katie Yoder, Natalie Hubby, and Stephanie Yoder all had nice games at the net. We had some really good backward digs to keep us in system where we get a good pass, and it goes to our target where our setter should be going, and we have three options at the net. Those three played really well.”

Serving was “not so good,” said Horning. “Three aces, 11 errors. I think maybe some of that was nerves, and some of the girls still need to adjust to the momentum of the game.

“Sometimes we go for too much, and sometimes we don’t go for enough. It’s just a matter of forcing the other team to receive it, trusting our defense because we not only hit well at the net but we block well, and we’ve just got to put it in play.

“I give some of that to Hilltop, too. They were very resilient defensively. They dug up a lot of stuff. For us to have three aces, that’s really low for us. We’re a good serving team.”