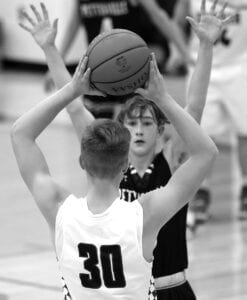 Pettisville’s Zakkai Kaufmann stares at Stryker’s Spencer Clingaman (30) while the Panther watches for a teammate to break free, Friday, Feb. 19, at Stryker.– photo by Mary Huber

Rivalries always add intrigue to the complexity of a game.

Mix in a chance to claim an outright conference championship, and the pressure and meaning of the contest intensify.

For the Pettisville Blackbirds, who already claimed at least a share of the Buckeye Border Conference boys basketball title, claiming an outright championship Friday, Feb. 19, at Stryker was a job they had to accomplish.

It wasn’t pretty and it wasn’t easy, but the Blackbirds (14-6, 10-2 BBC) held tough and took out the Panthers 41-36 to snap a fourgame losing streak and claim their fourth straight BBC championship.

“We had a share of the championship. You’re still going to put a sticker on the wall, and like I told the guys– in a few years from now it’s a BBC championship. 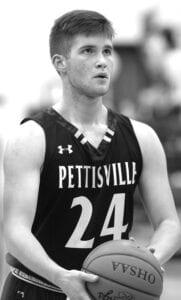 Dominic Heising makes one of two free throws with 21.3 seconds left to give Pettisville a four-point lead.– photo by Mary Huber

Fighting For A Lead

The Panthers jumped out to a 12-7 lead early midway through the first quarter, but Pettisville tied the game at 14 on a Cayden Jacoby conventional three-point play late in the quarter.

After Levi Barnum hit one of two foul shots for Stryker, Max Leppelmeier buried a three-pointer with two seconds left to give the Birds a 17-15 advantage after one.

Jacoby hit a free throw for an 18-15 lead, but Stryker answered with a Barnum field goal and back-to-back treys from Joe Ramon and Kaleb Holsopple to go up 23- 18.

After exchanging buckets, the Birds scored the final seven points of the quarter for a 27-25 lead at the half.

Scoring slowed down in the third, but neither team could pull away, as the Birds scored six points and Stryker, four.

The Panthers didn’t get their first field goal in the second half until there was 2:49 left in the period, and Pettisville was up 33-29 after three.

An Amos Sloan bucket and four straight free throws from Holsopple gave the Panthers a 35-33 lead with 5:23 left.

Pettisville scored the next six points on free throws by Jacoby, Leppelmeier, and Dominic Heising for a 39-35 lead with 1:49 remaining.

The Panthers had a chance after a Pettisville turnover with 52 seconds left, but could not cash in.

Heising and Zakkai Kaufman scored Pettisville’s final two points at the charity stripe to lock down the 41-36 victory.

“I thought we came up with some big rebounds at times and knocked down free throws at the end when we needed to,” said Leppelmeier.

“I thought our kids defensively in the second half executed our game plan as well as we could.

“You gotta give Stryker credit. They were taking Cayden away inside and making every catch difficult.”

Holsopple led all scorers, with 14 points, while Sloan chipped in 11.

The Birds were 14-18 at the foul line, including all eight of their fourth-quarter points, while the Panthers were 7-9.

The Birds accomplished a feat not many thought would be possible after replacing two starters from last season and losing senior Josh Horning to injury for the home stretch of the season.

“Going into the season, after last season, probably wasn’t a whole lot of people thinking that we would be in this situation,” said B. Leppelmeier.

“With Max, Josh and Cayden returning, they just did such a great job with not having a summer and leading all these younger players.

“When Josh goes down (due to a shoulder injury in January) we rallied, but they were really becoming a different team without him on the offensive end.

“Josh does such a great job on the offensive end facilitating our offense. You have Max up front and Cayden down low, and we have to have that connection in between.

“Hopefully we get that chemistry developed on the offensive end with our younger guys that are filling in for Josh.”

The seventh-seeded Hicksville Aces (9-10) invade the Bird Cage to face the thirdseeded Birds in the opening round of the Division IV sectional tournament tonight, 7 pm.

The winner advances to the district tournament in Defiance.

“They shot the basketball extremely well, and we’re going to have to get to their shooters,” said B. Leppelmeier.

“They have two great players in Landon Turnbull and Jackson Bergman.

“We’re really going to have to guard the three-point line and really keep them off the glass as much as we can.”