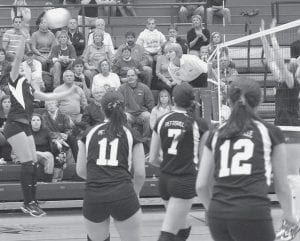 The pre-season goal of the Pettisville volleyball team was to advance to the regional tournament. 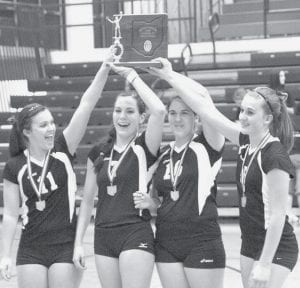 Now the Birds have to set a new goal after beating Antwerp for the Division IV district championship, Saturday, Oct. 25 at Napoleon.

"It felt like a rollercoaster," said John Horning, PHS head coach. "I think the first game was pivotal. We had a solid start.

"Antwerp came out with more hunger (in game three) than we did. That set up game four. We were on our heels, (but) I thought we battled much better.

"In the fifth game I give credit to the girls. I challenged them a little more in the huddle before the game of getting back to our scouting report.

"There were certain girls we wanted to serve at, there were blocking schemes we wanted to do depending on who was in the front row. I just challenged them to get back to the basics and then just have fun and play."

In the fifth game, "Karina Rohrer-Meck started off with an ace, we had some good touches to start with at the net, and some smart plays at the net," said Horning. "And then Stephanie Yoder came to the front, had some good blocks, and we held on at the end."

Horning said the team has a great work ethic and showed a lot of passion.

"From a hustle standpoint, the girls never quit. As far as ‘stick-to-it-iveness,’ I’d give our team an ‘A.’

"Passion’s been one of our words all year. The way we define it is, ‘knowing what you want and not stopping ’til you get it.’

"I give credit to our bench, too. They were outstanding. That shows a team commitment; whether you’re on or off the court, we’re united in what we want to do and how we want to do it, and we’re cheering and doing the little things that we want to do.

"It was a solid team effort. I couldn’t be more proud of a great group of girls."

The first game stayed close throughout, with neither team leading by more than three points.

The score was deadlocked at 22 when Chelsea Schmucker served an ace. After the Archers tied the score at 23, Pettisville called a time-out. The Birds came out of the huddle and closed out the first game 25-23.

PHS came out in game two strong and took a 14-5 lead before Antwerp called a time-out. The Birds were still in control 21-11 when the Archers started a comeback, closing the gap to 23-19.

PHS sat at game point after Antwerp’s Kole Schlatter spiked the ball into the net, and won when Yoder and Rohrer-Meck successfully double-blocked Mickae Schlatter.

Next Two Games To Antwerp

Antwerp really came alive in the third game, sprinting out to a 19-6 lead. Kelsey Bashore finished off the game with a kill in the corner.

Antwerp again jumped out to a large lead in the fourth game with an 18-9 advantage. Pettisville was down by seven, 20-13, but that was the closest it came the rest of the game.

It all came down to the fifth game. Rohrer-Meck’s ace and a Schmucker kill gave PHS a 2-0 lead.

The Birds extended the advantage to 9-2 with kills by Haley Nofziger, Katie Weber, and a block by Stephanie Yoder and some mistakes by Antwerp.

The momentum had swung to Pettisville’s side, and the Birds weren’t about to give it up.

With PHS leading 13-8, Antwerp put the Birds at match point with a net violation. The Archers climbed to within three and were down 14-11 when a spike by Nofziger was mishandled by the Archers, giving PHS the game and match.

"Defensively we need to do better. We need to really make sure we’re squared up," said Horning. "Our troubles came when we were kind of scattered, and our hitters had to go soft, or had to make adjustments that we didn’t want to have to make based on the balls they were getting."

Pettisville is in the regional tournament for only the third time in school history.

The first time was in 1997, when the Birds lost to Kalida in the semifinal.

The last time was in 2002, when PHS beat Riverdale in the semifinal but lost to Old Fort in the final, ending the season with a 24-3 record.

The Vikings bring a 23-2 record to the contest. They were ranked eighth in Div. IV in the final Ohio High School Volleyball Coaches Association poll.

Their only losses were to Columbus Grove, who was ranked ninth in the final Div. III poll, and Kalida, who finished sixth in the Div. IV poll.

"Leipsic was at regional last year," said Horning. "They were young and they were big and they were strong, so we know we’ve got our work cut out for us.

Wednesday night winners play for the regional championship and a trip to the state tournament, Saturday, Nov. 1, 2 p.m. at Elida.