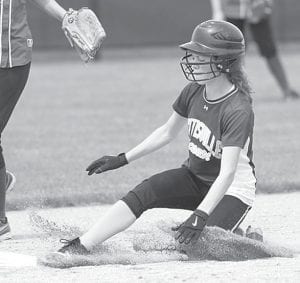 Lexie King steals second in the sixth inning of Pettisville’s sectional final with Stryker. Lauren Frey’s double brought King home, the first of four runs in the inning for PHS which sealed the 8-2 victory.– photo by Mary Huber

Pettisville won at least a share of its second straight Buckeye Border Conference crown last week, finishing with a 9-1 record.

The Birds defeated North Central 13-3, Monday, May 10, at Pettisville’s home field in Wauseon, then defeated Hilltop 7-4 at West Unity, Friday, May 14.

“Coming in as a new coach, I really didn’t know where we would stand in the BBC, but I was expecting to compete in each and every game we played,” said Kendra Stahl, PHS head coach.

“This is a great group of girls who know how to work hard and earn what they get.

“I told them toward the beginning of the season that the BBC is very winnable for us. It’s just been something we’ve strived for all season. Although we do have to (possibly) share it with Edon, I’m proud of these girls, and they deserve to be the BBC champs.”

Edon is 7-1 in the BBC with two league games left to play.

Pettisville finished its week by winning a Division IV sectional title, Saturday, May 15. The Birds defeated Stryker 8-2 for their second straight sectional championship. 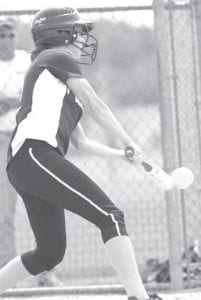 Delaney Nofziger goes to bat for Pettisville. Nofziger pitched the Blackbirds to an 8-2 sectional final victory over Stryker, Saturday, May 15.–photo by Mary Huber

The Birds led 1-0 after one. The Cadets tied the score in the fifth, but Pettisville erupted for six runs in the bottom of the inning to take a 7-1 lead.

Hilltop scored three runs in the top of the seventh for the 7-4 final.

Pettisville led 9-2 after two innings and coasted to the five-inning victory.

The Birds had 13 hits and were led by Kaitlin Nofziger, who hit a home run and a single, and Ashley Eicher, who homered. L. King hit a triple and a single; D. Nofziger and Roth, each hit doubles. E. King hit three singles.

Nofziger got the win on the mound. In five innings she allowed three runs on five hits, struck out six, and walked three.

The score was tied at 2 heading into the bottom of the fifth.

Adi Bruner led off the inning with a double, then stole third base and was brought home by E. King for a 3-2 lead.

Pettisville exploded for five runs in the sixth to insure the sectional championship.

“It was exciting to get the top seed and to finally be playing our tournament game,” said Stahl.

“I’ve tried to emphasize to the girls that no game is an ‘automatic win’ when you show up, especially in tournament.

“Beating a team three times can be difficult, and that’s what it was for us today.

“Although we got the jump with two runs, we kind of went into cruise control. It’s so easy to do that. But our bats came alive in the sixth.

“It usually just takes one to start a rally for us, and Lexie King did that. With two runners on, pinch-hitter Lauren Frey came up with a huge double, and that just kept the momentum going for us.

“Stryker has improved throughout the season and we handled their threat. As long as we keep hitting the ball solid, and our defense stays solid, we can make a great tournament run.”

Nofziger got the win. In seven innings she allowed two runs on five hits, struck out three, and walked one.

K. King led PHS at the plate with two triples and a double. Bontrager hit a double and two singles. Lauren Frey had a double, and L. King hit two singles.

Winners play Friday, May 21, 5 p.m., for the district championship.