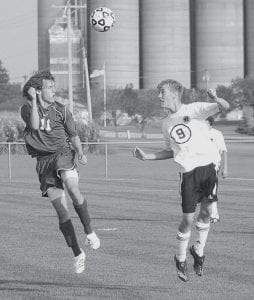 Chase Gingerich (9) bounces a pass off his head in Pettisville soccer action. The Birds are 7-7-1 on the season.- photo by Scott Schultz

The Pettisville soccer team hosted Ottawa Hills, Tuesday, Oct. 2, and lost 7-1. Next on the schedule was a Saturday, Oct. 6, game at Wauseon, which resulted in a 1-1 tie.

Ottawa Hills showed why it is the third-ranked team in the state as the Green Bears scored early and often.

The first two goals were results of crosses and were followed by a free kick and a shot from outside the 18-yard box.

After a save, goalkeeper Andy Switzer boomed a punt past midfield, which was dribbled in by Quinn Nofziger and chipped over the OH goalie.

A very intensive game, Pettisville had numerous chances in the first half but was unable to find the back of the net.

A Wauseon defender collided with Pettisville midfielder Brian Plank in the first half, which resulted in Plank being helped off the field with an ankle injury.

Late in the second half, a Wauseon forward fell in the penalty box and was awarded a penalty kick, which ignited the fans for both teams. The Wauseon PK sailed just out of the reach of a diving Switzer.

Minutes later, Phillip Roth carried the ball outside of the 18 and blasted a shot that flew over the reach of the Wauseon keeper to tie the score at 1, which is how the game ended.