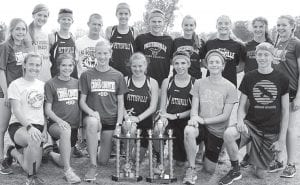 The girls team finished with 34 points to win the title, with its top five finishers all placing in the top 16.

The boys team finished with 67 points to take the title.

“Our boys ran a tough race and pulled out the victory,” said Wagner.

“When we signed up for this race we really didn’t know anything about all these Michigan teams for either the boys or girls. We finished 5-7-12-28-31 to win by 13 points.