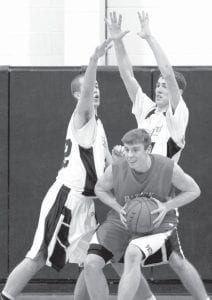 The victory raised Pettisville’s record to 2-4, and dropped PH to 4-2.

How much did PH’s height bother the Birds?

“A ton, but we’re getting to the point now where everybody’s taller than we are,” said Greg Nofziger, PHS head coach.

“We haven’t played a single team that we’ve had size on, so maybe we’re finally getting used to the teams that are bigger than us and finding what we can and can’t do.” Patriots Go On A Run

PH jumped out to a 12-1 lead in the first quarter before the Birds went on a 7- 0 run to finish the quarter down 12-8. Aaron Bruner hit two straight deuces and Taylor Short hit a three-pointer to complete the run with 42.5 seconds left in the period.

Left: Aaron Bruner hits a deuce with 2:08 left in the third period to close the gap with PH to one point, 32-31. Right: Zach Pursel put the Birds ahead 34-32 with a traditional three-pointer in the third period, and scored a bucket with four seconds left in the period to give PHS a 36-35 lead heading into the final eight minutes.– photo by Mary Huber

Pettisville scored the first two points in the second period on free throws by Bruner to close the gap to 12-10, but couldn’t quite get over the hump. The Patriots built the lead back to eight, 22- 14, with 3:56 left in the half, and were ahead 28-21 at the break.

The Birds came out of the locker room and scored the third period’s first seven points to tie the score at 28. Aaron King started the run with a deuce, which was followed by a Bruner free throw and basket off an offensive rebound.

Zach Pursel tied the score with a basket at the halfway mark in the period.

Shane Bostelman scored to put PHHS ahead 30-28. Jacob Rupp hit one of two free throws for PHS. Nick Gerschutz hit a shot for the Pats giving them a threepoint lead, 32-29.

Bruner hit a basket, and Pursel scored a conventional three to put Pettisville ahead for the first time in the game, 34-32.

Bostelman hit a basket and was fouled. He made the free throw and PH was back in the lead, 35-34.

With PH leading 46-45 and 2:54 left in regulation, Rupp hit one of two foul shots to tie the score at 46. The Patriots were called for an offensive charge, and Pettisville went into a stall to hold the ball for the last shot. King’s shot rolled off the rim and PH grabbed the rebound with 2.7 seconds left.

After a pair of time-outs, Kolby Seemann threw the ball to half-court where PH called another time-out to set up a last play. Seemann inbounded the ball to Kent Tietje, who put up a desperation shot that was far short of the basket, sending the game into OT. Overtime

The extra period was all Pettisville. With the Birds leading 50-47 and 57 seconds left on the clock, PH started sending the Blackbirds to the foul line. Pettisville went 10 of 10, including eight of eight by Short, at the free-throw line in the final minute for the 58-49 victory.

“(PH) got down, and when you get down you end up having to foul,” said Nofziger. “As long as we make foul shots we can stretch it out. I thought we did a nice job taking care of the basketball in the second half.

“I thought that was huge compared to the first half.”

Pettisville committed only two turnovers in the second half and overtime. The Birds had 12 in the game, while PH had 21.

Bostelman led PHHS with 18 points. Brett Yungmann (Continued on page 5) (Continued from page 4) was also in double figures, with 12.

“It’s nice to see the kids step up and start hitting some clutch shots. I thought we actually had several hustle plays out of Aaron Bruner and Jacob Rupp, and Taylor Short was pushing the ball well.

“It just seemed like at key times we were coming up with the basketball when we needed to.”