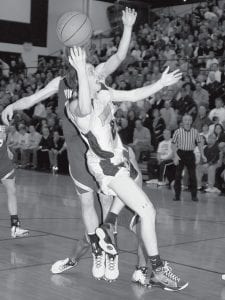 Quinn Nofziger takes an off-balance shot against Leipsic but still keeps his eye on the basket. The PHS senior led all scorers with 22 points in the Blackbirds’ 59-46 district semifinal victory.- photo by Scott Schultz

Pettisville outscored Leipsic 15-6 in the fourth quarter on its way to a 59-46 Division IV district semifinal victory, Tuesday, March 10.

Pettisville (20-2) opened with a 4-0 run with layups by Michael Deffely and Quinn Nofziger.

Nofziger opened the second with a layup. Jordan Klopfenstein added a deuce at the 6:41 mark to tie the score at 16. For the rest of the period the lead went back and forth, with Leipsic ahead 29-28 going into the locker room.

Leipsic cut the difference to two, 37-35, with 4:41 left in the quarter but that was as close as the Vikings got for the rest of the game.

Leipsic’s Jacob Schroeder hit a three-pointer to close out the third period, and Pettisville took a 44-40 advantage into the final eight minutes.

Baskets by Deffely, Nofziger, and Michael Burkholder upped the difference to 10, 50-40, to start the final period. The closest the Vikings came again was eight, 52-44, but Nofziger came back and hit a basket to give PHS a 10-point lead again.

After Liam Nadler hit one of two foul shots, an intentional flagrant foul was called on the Vikings with 2:20 left, giving PHS two foul shots and possession of the ball. Nofziger hit both free throws, and on the following play Jordan Klopfenstein was fouled and hit one of two shots at the line for a 58-45 lead.

Nofziger led all scorers with 22 points. Deffely was also in double figures, with 17.

Nadler was the only Viking in double figures, with 15.