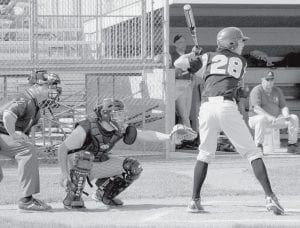 Jordan Klopfenstein leads off the batting order for the Blackbirds. He went 2/3 with 1 RBI in Pettisvile’s 11-3 BBC victory at Hilltop, Monday, April 28.- photo by Scott Schultz

The Pettisville baseball team picked up a pair of wins last week to improve to 5-8, and stayed perfect at 5-0 in the Buckeye Border Conference.

PHS hosted the Stryker Panthers, Thursday, May 1 and picked up a 9-6 BBC victory.

At the plate Nofziger and Harris King both went 2/4 with Nofziger recording one run batted in.

Erb was the losing pitcher. In six innings he allowed nine runs on seven hits, struck out eight, and walked two.

The Birds led 2-1 after two innings. PHS scored three runs in each of the third and fourth innings while the Panthers scored only one for an 8-2 lead.

Stryker outscored PHS 3-1 in the fifth to close the gap to 9-5, but scored only one run in the sixth for the 9-6 final.

Traveling to Hilltop, Monday, April 28, the Birds came back from a 3-0 deficit after the first inning to crush the host 11-3.

Nofziger picked up the win and pitched a complete game. He gave up three runs on five hits, fanned eight, and walked one.

Josh Bruner paced the Birds at the plate, going 3/5 with 3 RBIs.

Nofziger picked up a pair of RBIs on two hits. Andy Switzer went 2/4 and Jordan Klopfenstein went 2/3 with 1 RBI.