Birds Improve To 5-1 With Two Victories 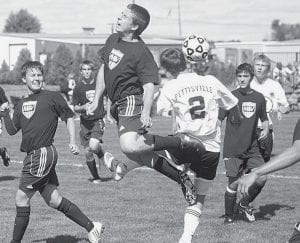 Pettisville’s Jordan Klopfenstein (2) and a Maumee Valley Country Day player use their heads in their soccer match, Saturday, Sept. 6. The Birds defeated the Hawks 3-1, upping their record to 5-1 on the season.- photo by Scott Schultz

The Blackbirds traveled to Wauseon, Thursday, Sept. 4. Pettisville scored four goals with only 10 shots on goal and won 4-1.

PHS hosted Maumee Valley Country Day, Saturday, Sept. 6. With both schools tied at 1 at halftime, Pettisville scored twice in the second half for a 3- 1 final.

Pettisville started sloppy but soon found the back of the net after Quinn Nofziger shot the ball to the right of the keeper.

Jordan Klopfenstein was the next to score after a Nofziger shot was deflected right to Klopfenstein’s feet, who pounded the ball into the back of the net. The half ended with PHS ahead 2- 0.

Pettisville started the second half with more intensity as Nofziger dribbled around the goalie and put the ball into the open net. Wauseon then netted its only goal off of a penalty kick, which was put past the Pettisville goalie.

Nofziger finished the scoring with a low shot past the Wauseon keeper.

The Hawks visited for a very physical game in which numerous yellow cards were issued, including a red card to a MVCD player.

A red card is presented for violent behavior or multiple rule infractions; the player is removed from the game.

Pettisville started the scoring when Nofziger crossed the ball to Klopfenstein, who headed it into the top right of the goal.

The Hawks struck right back as a MVCD forward drilled the ball to the right of the Pettisville keeper.

Pettisville struck back in the second half as Nofziger played a short ball to defender Kyle Graber, who blasted a shot into the right upper corner past a diving goalie.

Nofziger dribbled around the keeper and put the ball into the open goal to end the scoring.