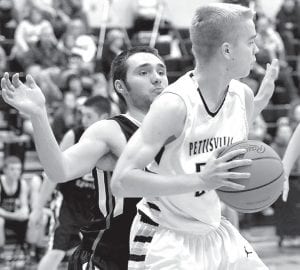 Landon Roth tries to shake off a North Central Eagle in their BBC contest, Friday, Feb. 19.– photo by Mario Gomez

It was the final home basketball game for four Pettisville seniors. It was only fitting that they all start the game in their last home appearance.

After the Eagles jumped out to a 6-0 lead in the first five minutes, King finally got the Birds on the board with a three-point basket.

Pettisville scored the next seven points to end the first quarter leading 10-6.

North Central scored on a three-point play to start the second. It was the last time the Eagles would get close.

Justin Rupp nailed a three for PHS to push the lead to 13-9.

After a NC bucket, Beck and Detric Yoder hit four straight free throws to give the Birds a 17-11 halftime lead.

Ben Gray shoots from the corner.– photo by Mario Gomez

After NC scored the first three points of the second half, PHS went on a 10-0 run on three-point baskets by King and Rupp and layups by Beck and Caleb Rychener for a 27-14 lead.

The Eagles ended the run with a free throw, but Rychener scored the final three points of the period to take a 30-15 advantage into the final stanza.

Beck and King scored the first four points of the fourth to give PHS its biggest lead of the night at 34-15.

Rupp led all scorers with 11 points and was 3-5 from three-point range.

The Blackbirds out-rebounded the Eagles 28-19 and committed 13 turnovers to NC’s 15.

Justin Nofziger waits for a teammate to hand off the ball.– photo by Mario Gomez

Pettisville (7-15) was scheduled to take on Edon (4-18) in a Division IV sectional semifinal last night, Tuesday, at Swanton.