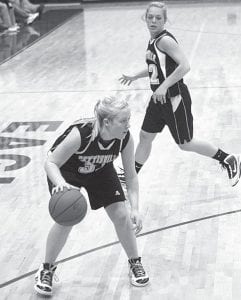 Kaitlyn Nofziger (22) breaks free from Fayette’s defensive pressure and Erica King, front, waits for a hole to open under the basket.– photo by Mary Huber

The Birds also won the Buckeye Border Conference with a perfect 10-0 record.

The Birds were back on the road, Thursday, Feb. 18, to Fayette. PHS finished the regular season on a good note with a 51-30 BBC victory.

“We didn’t shoot very well in the first half and didn’t control the boards, either,” said Jason Waldvogel, PHS head coach. “The second half, we rebounded better and had some shots fall.”

The Tigers won the rebounding battle 26-22, but committed 21 turnovers to Pettisville’s nine.

Erica King led all scorers with 25 points, including five of the team’s six threepointers. Kaitlann Hogrefe led LC (5-15) with 13.

Pettisville took charge in the third period 16-6, and a 17-11 fourth period gave the Birds the 21-point margin of victory.

“We were slow to start the game,” said Waldvogel. “Give Fayette credit for their hustle. We played a lot harder in the second half.”

King again led all scorers, with 16 points. Starting tournament play she has 1,132 points, and is 16 points away from tying Jennifer Rupp, Pettisville’s second highest career scorer, who had 1,148.

Lynelle Richer is the Birds’ all-time female leading scorer, with 1,628.