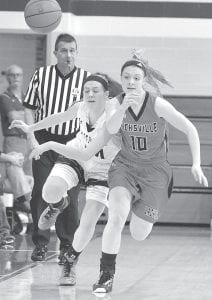 It was an early exit for the Pettisville girls basketball team (13-10) as the Birds were defeated by Hicksville in a Division IV sectional semifinal, Wednesday, Feb. 17. at Defiance High School.

In a tense first quarter, both teams found it difficult to get into a scoring rhythm.

After Hicksville’s Addison Bergman scored the first basket, Anya Kauffman answered with a jumper to tie the score at 2.

The Aces scored the next three points on free throws for a 5-2 lead.

After a Pettisville free throw cut the lead to 5-3, Katelynn Berenyi scored to give Hicksville a 7-3 lead.

Leppelmeier started the second quarter with a layup to tie the score at 9.

Avery Demland scored the next four points for Hicksville, leading to a quick Pettisville time-out.

Kauffman drained a threepointer after the time-out to cut the difference to 13-12.

After a Hicksville bucket, M. Leppelmeier scored on a jumper and then nailed a three to give the Blackbirds their first lead at 17-15.

After Hicksville tied the game, Alexa Leppelmeier hit a three for PHS.

The Aces scored on a pair of free throws, but Pettisville ended the first half leading 20-19.

Pettisville jumped out quickly in the second half with a layup by A. Kauffman and a jumper by Kate Kauffman to go up by five, 24-19.

Hicksville came back with a pair of baskets, but A. Kauffman scored on another jumper to push the difference back to three, 26-23.

The Aces scored the final six points of the quarter to take a 29-26 lead into the final eight minutes.

The fourth quarter belonged to Hicksville’s Chelsey Taylor. She scored 12 of her game-high 22 points in the period to help the Aces pull away.

Pettisville scored only seven points in the fourth.

Near the end of the game, the seniors who were playing their last game in a PHS uniform took the court as the game and season came to an end.

“I am extremely proud of our girls,” said Jason Waldvogel, PHS head coach. “Our girls may not be very tall in stature, but they’ve got big hearts and they just worked hard.

“They wanted to take the shots. Sometimes they just don’t fall, and that’s happened a few times to us this year.”

“It’s been a while since we had six seniors, and that says something about that group of kids,” said Waldvogel. “They’re willing to do anything for the team. (It) didn’t matter whether it was on the court or off.

“They’ve been part of a lot of success here in their four years.”

M. Leppelmeier led Pettisville with 15 points. A. Kauffman chipped in 12.