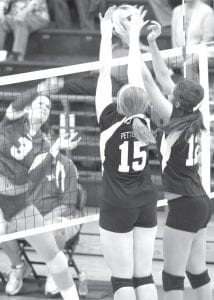 Left: Natalie Hubby (15) and Stacey King (12) block the spike of Edon’s Chelsea Chapin in Pettisville’s BBC rematch with the Blue Bombers, Thursday, Oct. 14. The block gave PHS an 18-10 lead in the second game; the Birds won the game 25-17. Right: Tessa Yoder sets the ball for a Blackbird attack.– photos by Mary Huber

Volleyball fans knew it would be a battle when Pettisville hosted Edon, Thursday, Oct. 14 for the final Buckeye Border Conference match of the season.

Pettisville was ranked 17th with an 18-2 record.

The Birds won the first contest between the two in five games on Thursday, Sept. 23 at EHS.

It was the first time Pettisville had beaten Edon in a BBC match since 2003.

So the Blue Bombers were out for revenge, Thursday, Oct. 14, at the Bird Cage.

The large crowd in attendance expected another five-game marathon, but the Blackbirds took control early. They won the first two games 25-20, 25-17, and came back from a 24-21 deficit in the third game to win the match 26-24, giving Pettisville the outright BBC title with a 9-1 league record.

It is the first time since 2002 that PHS is the league champion.

They went 10-0 that year and made it to the regional final, finishing with a recordsetting 24-3 record.

“It’s been a long time,” said John Horning. “I’m proud of the girls. This is one goal they had set at the beginning of the volleyball season.

“The Stryker loss (on Sept. 14) didn’t kill our chances, but made it a lot tougher. The win over at Edon put us back in it and made this one matter.

“One of us was going to win it; we weren’t going to share it.”

Winning in three games “was kind of the dream,” said Horning.

“I’m real proud of our execution, our poise. To win that in three, to come back in the third game, showed a lot of resolve, a lot of team cohesion, a lot of confidence.”

Pettisville led 20-14 in the first game when Edon called a time-out. Pettisville was up 23-18 when it got to game point on a Katie Yoder kill.

Pettisville’s serve went in the net and Sydney Stoll’s kill closed the deficit to 24- 20, but an error gave PHS the first game 25-20.

Once again Pettisville took control in the second game and led 22-10 before giving the side out to Edon. The Blue Bombers climbed back to within seven, 22-15, when Edon’s Jennifer Van Vleet set the ball over the net but out of bounds, giving PHS the serve.

Edon got the serve right back, but K. Yoder’s kill put PHS at game point, 24-16. A bad Pettisville serve gave the ball back to Edon, and S. Yoder’s spike was blocked out of bounds, giving PHS the 25-17 victory.

“Before the start of the third game I looked at (my assistant) coach and said, hey, can we do this in three?” said Horning.

The third game stayed tight, with neither team leading by more than five points.

Coming out of the timeout, S. Yoder served an ace, but on the next play the Bombers got to game point when Pettisville’s spike went into the net.

Down 24-21, the Birds showed their resolve. They scored two points and were down 24-23 when Edon called another time-out.

After Calli Imm’s spike went into the net for Edon, the teams were deadlocked at 24, and the momentum had swung back in Pettisville’s favor.

“For us, for sure, the best match we’ve played of the year,” said Horning.

“We haven’t hit like that all year. I thought our serve receive game was pretty good and the volleys I thought were pivotal, as far as coming out of those and getting that momentum after winning those points. I thought we blocked really well.

“I thought our seniors played amazing tonight. Steph (Yoder) and Tessa (Yoder) get a lot of attention– they’ve had the most varsity experience, but I thought Kylie (Garcia) and Stacey (King) played really, really well tonight.”

The Birds, seeded number one in the Division IV sectional tournament at Pettisville, play Hilltop, Saturday, Oct. 23, 3 p.m., in a sectional final.

Pettisville and Edon will meet for a third time this season if both teams win their Div. IV sectional tournaments. The two would play at 6:15 p.m., Tuesday, Oct. 26, in a district semifi- nal at Paulding.

“I think our district is pretty tough, but if we play like we did tonight, and get a little bit better, a little more consistent in the serving game, I wouldn’t count us out against anybody,” said Horning.

“We are a well-rounded team with the heart of a lion.”