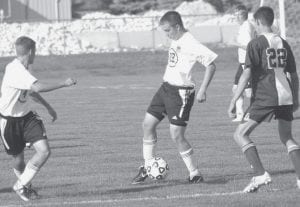 Jacob Rupp (4) gets ready to sprint down the field after Zane Miller (19) gets control of the ball in PHS soccer action earlier this month.- photo by Scott Schulz

The Blackbirds faced Toledo Christian, the number two seed, Saturday, Oct. 18 in the sectional final. Pettisville lost 2-0, ending its season with a 12- 6 record.

Neither team scored in the first half.

In the second half, an Andy Switzer punt floated over all of the defenders and was met by a speeding Quinn Nofziger, who tapped the ball past the charging Hawk keeper.

Minutes later, the Hawks tied the score at 1 when a shot ricocheted off the left post, and a MVCD player was there to finish the rebound.

Neither team scored in the rest of the half, and the game went to the first sudden death period. With less then two minutes left, Jordan Klopfenstein volleyed a bouncing rebound, shot the ball over the outstretched arms of the goalie, and hit the crossbar.

Quinn Nofziger then dove in and scored on a diving header to give the Birds the 2-1 victory, sending PHS into the sectional final.

Both teams were aggressive in the first half, but neither team was able to penetrate the defense to get a good shot on goal.

In the second half, TC was awarded a free kick just outside the Pettisville 18-yard line. The kick was taken to the left and an Eagle volleyed the ball back to the right, where another Eagle finished the play.

TC came right back, scoring again when an Eagle shot the ball past the sliding Pettisville goalie for the 2-0 final.