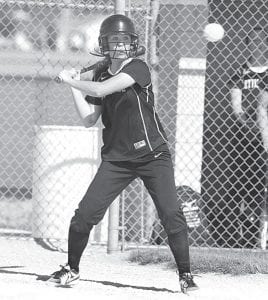 Anything can happen at tournament time.

Pettisville, seeded second in the Division IV sectional softball tournament at Stryker, had beaten the Panthers 14-3 and 6-0 during the regular season.

But in the sectional final, Tuesday, May 14, it was the Panthers (6-12) who came out victorious, defeating the Birds 4-2 to advance to the district tournament.

Stryker scored all of its runs in the top of the third inning. Conner Varner hit a line drive to right field, scoring two runners, followed by Tasha Pegorch hitting a single up the third base line to score one runner.

The Birds closed the gap to 4-1 with a run in the bottom of the third when Delaney Nofziger’s fly ball to left field scored Amber Klopfenstein from third base.

Pettisville scored its final run in the seventh, when Klopfenstein again crossed the plate.

The Birds had five hits, and were led by Klopfenstein’s two singles. Taylor D’Alelio, Emily Hubby, and Kaija Blosser each had a single.

Nofziger was the losing pitcher. In seven innings she allowed four runs on eight hits, struck out five, and walked one.

Varner was the winning pitcher. In seven innings she allowed two runs on five hits, struck out six, and walked one.

PHS led 2-1 after one, but the Indians scored three runs in the third and three in the sixth to take the nonleague victory.

Nofziger was the losing pitcher. In six innings she allowed seven runs on 11 hits, struck out four, and walked none.

Pettisville had only three hits. Nofziger hit two singles, and Mallory Riegsecker had a single.

The Birds finished the season with a 13-8 record after defeating Bryan 8-2, Thursday, May 16, at Bryan.

The Bears’ two runs were scored in the second inning.

Pettisville scored three runs in the third, one in the fifth, and four in the sixth for the victory.

Nofziger won her final game as a Blackbird. In seven innings she allowed two runs on eight hits, struck out five, and walked one.

The Birds had 11 hits. Klopfenstein had two doubles and a single; D’Alelio, three singles; Nofziger, a triple and four RBIs; Hubby, a double; Blosser and Johanna Roth, a single each.