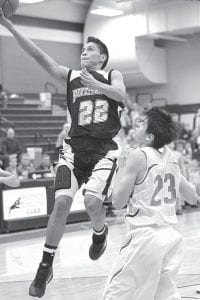 Pettisville’s David Reyes (22) drives past Delta’s Scott Garlinger for a basket in the fourth quarter.– photo by Mary Huber

Getting outscored 17-8 in the third quarter doomed Pettisville, Saturday, Dec. 3, at Delta, as the Panthers defeated the Birds 53-44 in boys basketball action in “The Jungle.”

Pettisville led 6-5 in the first period, but two straight baskets by Justin Callahan gave the Panthers a 9-6 lead. Aaron King sank a basket at the buzzer for PHS to close the gap to 9-8.

The game stayed tight in the second period and the lead seesawed back and forth, with PHS taking a 22- 20 lead into the locker room.

The Birds led 27-26 midway through the third when three straight three-pointers, two by Micah Mohr and one by Blake Green, gave the Panthers the lead for good, 35-27.

Zach Pursel broke the string with a basket with 1:01 left, then was fouled with 17.5 seconds left. He made one of two foul shots to bring PHS within five, 35- 30.

Mohr was fouled with 8.5 seconds left. He sank both shots and Delta took a 37-30 lead into the final eight minutes.

The Panthers lengthened the difference to 12 halfway through the fourth quarter, and Pettisville was unable to get any closer than seven points after that.

Pursel led all scorers with 14 points; he also grabbed 10 of the team’s 20 rebounds. King was also in double figures, with 11.

Each team had 13 turnovers.