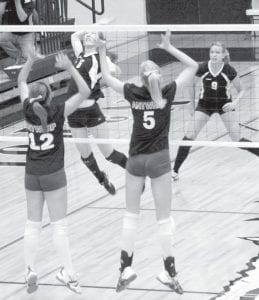 Pettisville’s Chelsea Schmucker goes for a kill while Antwerp’s AJ Stuck (12) and Taylor Vail (5) attempt a block. The Blackbird senior had 10 kills in the contest, but the Archers won the Div. IV district semifinal in three games.– photo by Mary Huber

The Pettisville volleyball team (16-8) fell short of its goal to return to the regional tournament, losing to Antwerp in the Division IV district semifinal at Napoleon, Tuesday, Oct. 27.

“I was very proud of the girls on Tuesday night,” said John Horning, PHS coach. “I thought we played hard. We just came up short against a strong Antwerp team that played great defense and were strong at the net.

“Antwerp got their hands on a lot of our attacks, which made it really hard for us to get into a rhythm offensively.”

The two teams battled evenly in the first game, with neither team jumping out to a lead larger than four points. With the score tied at 20, several Pettisville errors put Antwerp at game point, 24-21. Megan Koppenhofer’s kill gave the Archers the first game.

“I thought the first set was huge, as far as a team gaining the upper hand for the rest of the match,” said Horning. “We were both there at 20-20, and they executed better than we did at the end of that set.”

The Archers started to take charge in the second game. After a tie score at 5, Antwerp scored five straight points before a Chelsea Schmucker kill ended the run.

The Birds closed the gap to 10-9 before an error gave the serve and the point back to Antwerp.

Antwerp outscored PHS 13-2 for a 22-12 lead when Katie Yoder’s spike went off the blockers’ hands for a side out. But it was the last point PHS scored as Antwerp won the game 25-13.

The score was tied at 10 in the third game when the Archers went on a 7-1 tear for a 17-11 lead. Antwerp won the game and match when AJ Stuck’s spike went off the Pettisville blockers’ hands.

“Napoleon is such a great place to play, but also intimidating,” said Horning. “We gained a lot of experience and, we hope to be used this experience to be better next season.

“The girls worked really hard this year, and I thought the team got along well throughout the season. We were playing in the districts for the third year in a row, and I think the girls have a lot to be proud of.”

“Lynae Fry, Ashley Eicher and Sarah McDermott played in the right front this season. They really worked hard at becoming stronger blockers and attackers this year.

“Chelsea Schmucker was a three-year starter. She brought excellence, a strong work ethic and showed leadership by example this season, all of which will be missed.

“She had a great season and will be tough to replace.”