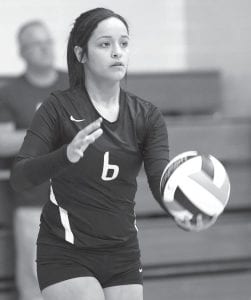 Blackbird senior Ezzie Hernandez goes back to serve in the Div. IV district semifinal against Antwerp.– photo by Mary Huber

Pettisville was unable to find an answer for Antwerp’s Rachel Williamson, as the junior had 20 kills and three blocks in the Archers’ 25- 23, 25-21, 25-22 Division IV district volleyball semifinal victory, Tuesday, Oct. 25, at Defiance High School.

Pettisville ended its season with a 20-4 record.

All three games stayed tight throughout, as neither team led by more than four points in any of the games.

But Williamson got another kill to end the game, 25-23.

Antwerp led 23-21 in the second game when Pettisville’s block of a Sydney Sheedy spike went out of bounds, and Pettisville’s serve receive on game point hit the ceiling and was unable to be retrieved. 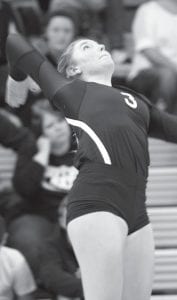 Senior Teagan Kauffman had 12 of Pettisville’s 42 kills against the Archers.– photo by Mary Huber

A couple of Pettisville errors helped Antwerp score its final two points in the third game.

“They worked hard and scrappy all match. We were beaten by a very nice Antwerp squad.

“We had a couple of changes late in sets to put more pressure on them, but in the end they made more plays to close out each set.

“We were supported by an amazing crowd. Our student section was great!

“The girls worked so hard this season and came so far. They accomplished most of their team goals and should be very proud of themselves.”