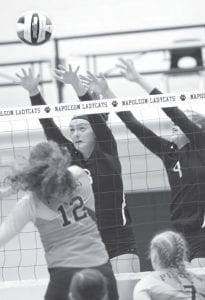 The Pilots led 20-11 in the second game when the Birds mounted a comeback to get within three, 23-20. But Ayersville’s Aubrey Florence had a kill to get the Pilots to game point, and then they finished off the game 25-20.

Pettisville controlled much of the third game, leading 22- 12 when Ayersville made its own comeback to get within four, down 23-19.

The Birds were at game point, 24-19, when a Pilot attacker mistimed a spike, but then Ayersville scored four straight points to come within one, 24-23.

Morgan Leppelmeier finished off the Pilots with a kill to end the game. 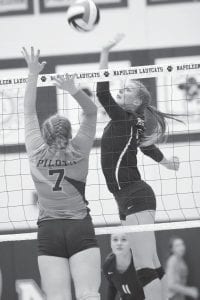 Ayersville led 20-14 in the fourth game, but Pettisville got within one, 23-22, when Pilot coach Julie Gustwiller called a time-out.

Amanda Addington put Ayersville at match point with a kill, 24-22, but Florence’s spike was blocked, pulling Pettisville to within one again, 24-23.

Pettisville’s next serve was long and the match belonged to Ayersville.

“I am proud of the effort and improvement this team has made over the season,” said Horning.

“Our seniors– Kyra Behnfeldt, Jess Youse, Kendal Pursel, and Sami Tilley– will be hard to replace next year. They all improved so much in the last four years and were huge contributors to our team success this year.”