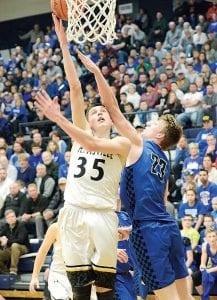 Each team owned a regular season win over the other, but on Wednesday, March 6, Pettisville and Stryker locked horns in a survive-and-advance game in a Division IV boys basketball district semifinal at Napoleon.

“It was a fun game,” said Brian Leppelmeier, PHS head coach. “It was tough to get stops on them.

“They were just going downhill.”

Slow But Exciting First Half

Pettisville was up 8-6 after one, and the difference in the second was never more than four.

Stryker scored nine points on three straight threes to cut the difference to 39-33, but PHS took a 43-36 advantage into the final quarter.

Rufenacht buried a trey to start the fourth.

Stryker never got any closer than seven points in the fourth while Pettisville rode the back of Yoder, who scored 11 points in the period.

“Detric does a pretty good job of seeing what the defense is gonna offer,” said Leppelmeier. “I trust him out there on the floor.

“He’s had the basketball in his hands now for a third year.”

With a minute left, the Birds led 60-50 when Luke Holsopple nailed a three for Stryker.

Pettisville hit 5-6 free throws down the stretch and held the Panthers to just three more points to advance to its first district final since the 2009 season.

“I knew (the lead) wasn’t safe,” said Leppelmeier. “That 15-point lead– they can erase that in a hurry.

“We’re coming down the floor and were trading free throws and they’re hitting threes. Something had to give there, so we had to really chase them off the line.”

Yoder led all scorers with 32 points.

“It’s a simple game,” said Yoder. “I feel like one-onone, a good basketball player should be able to score, so that’s what I did.

Holsopple and Logan Boetz paced Stryker with 19 and 11 points, respectively.