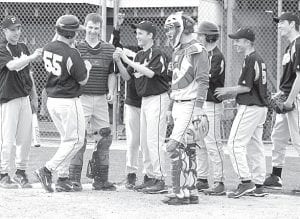 The Blackbirds welcome Kyle Graber (55) home after the junior smacked a home run in Pettisville’s 7-5 victory over Stryker, Monday, April 12. Graber and Philip Roth each hit homers in the top of the third inning to pace the Birds.–photo by S cott Schultz

The Pettisville baseball team was on top of its game last week, riding a threegame win streak to improve its record to 3-8, 2-0 Buckeye Border Conference.

The Birds started the week with a 7-5 win over Stryker. Next was a 20-1 drubbing of Fayette. PHS ended with an 11-7 win over Archbold.

Pettisville won its first game of the season, Monday, April 12, with a 7-5 victory over the Panthers.

A pair of home runs by Philip Roth and Kyle Graber in the top of the third inning paced the Birds.

PHS fell behind 4-2 heading into the third when the duo cranked homers over the right center fence to knot the score at 4. The Birds scored twice in the fifth and once in the seventh to secure the win.

Zach Pursel had a double.

Miller picked up the win on the mound, giving up five runs (three earned) in seven innings on seven hits. He struck out two and walked four.

Josh Klopfenstein picked up the win. He gave up one run on four hits, struck out six and walked five in five innings.

Pettisville picked up its third win in a slugfest when the Birds hosted Archbold, Friday, April 16.

The visiting Streaks recorded 12 hits in the loss.

P. Roth picked up the win. In seven innings he gave up seven runs (three earned) on 12 hits, struck out eight, and walked three.

At the plate, J. Roth, Pursel, Graber, and P. Roth all went 2-4. Graber also had a double and smacked in four RBIs. Miller and Klopfenstein each had triples. Travis Beck went 1-3 with two RBIs.

For Archbold, Corey Wyse went 3-4 with a pair of doubles. Sam Miller went 3-3 with a double, and Corey Walker went 2-4 with a double.

Garrett Morton suffered the loss on the mound for AHS, which dropped to 6-5. In 1 1/3 innings he gave up five runs on six hits, struck out three, and walked one.