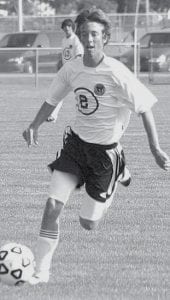 Jordan Klopfenstein brings the ball down the field for Pettisville.- photo by Scott Schultz

The Pettisville varsity soccer team was victorious in two games last week. Wauseon came to Pettisville, Thursday, Sept. 6, and the Birds sent the Indians home with a 2-1 loss.

The Blackbirds traveled to Crestview for a night game under the lights, Saturday, Sept. 8. PHS upped its record to 4-3 with a 5-0 victory.

A soccer match between Pettisville and Wauseon is always physical, and this one was no different.

Numerous fouls were committed against both teams. A yellow card was handed out to Pettisville’s Clay Norris as he flew into an Indian player.

Blackbird Phillip Roth started the scoring, finishing a cross from Jordan Klopfenstein. Wauseon came right back as an Indian player ran through the box unmarked to drill the ball into the net.

The second half continued to be as intense as the first. The final goal was scored when Pettisville’s Zach Waidelich carried the ball up the right side and crossed the ball into Klopfenstein, who had little trouble putting it past the Wauseon keeper.

Pettisville made the trek to Crestview to play a game in the rain and under lights.

The scoring was all Pettisville as Quinn Nofziger scored two goals and assisted another. Roth had one goal and one assist; Aaron Rupp and Zane Miller each had one goal, and Klopfenstein added another assist.

The PHS defense played a good game, not allowing a goal to be scored.