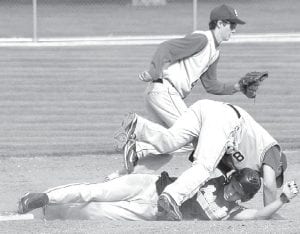 Pettisville’s Philip Roth slides and avoids a tag and successfully steals second base in the Birds’ BBC contest with Stryker, Thursday, April 29.– photo by Scott Schultz

The Pettisville baseball team fell to 4-14, 2-4 in the Buckeye Border Conference last week after losing to Hilltop, Stryker, and Edgerton.

PHS opened the week with a 6-3 BBC loss at Hilltop, Tuesday, April 27. The Birds hosted Stryker, Thursday, April 29, and fell to the Panthers 4-1 in another BBC game.

Zane Miller suffered the loss. In six innings he gave up six runs (five earned) on eight hits, struck out seven, and walked one.

The Birds cut into the 4-0 deficit with two runs in the top of the fourth and added one in the seventh.

The Birds mustered only one run in the bottom of the sixth, while Stryker (6-8, 4-2 BBC) scored twice in the second, once in fifth, and once in the seventh.

Josh Klopfenstein suffered the loss on the mound. In seven innings he gave up four runs (one earned) on seven hits, struck out three, and walked three.

The Birds out-hit the Bulldogs 14-12 but could not come up with a win.

Edgerton (12-7) came out firing, scoring six runs in the top of the first inning. PHS scored one run in the bottom.

The Bulldogs scored again in the second for a 7-1 advantage.

Pettisville scored four runs in the third to close the gap to 7-5, but Edgerton widened the gap to 8-5 after four.

The fifth inning was a scoring battle, as Edgerton scored three runs and Pettisville, five, for an 11-10 Bulldog lead going into the sixth.

The Birds tied the score at 11 in the bottom of the sixth.

The Bulldogs scored five runs in the top half of the seventh while the Birds tallied only two for the 16-13 final.

Miller led PHS at the plate, going 4-5. Aaron Bruner went 3-5 with two runs batted in. Klopfenstein added two RBIs, going 2-4 at the plate. Getting one hit each were A. Roth, Rupp, P. Roth, Kyle Graber, and J. Roth.

Graber suffered the loss, giving up five runs (one earned) on four hits. He struck out three and walked two in two innings.