Bill Decator Keeps An Eye On Fans At “The Big House” 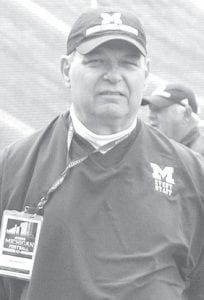 If you attend a University of Michigan football game at Michigan Stadium, you might find Bill Decator of rural Ridgeville Corners looking back at you.

Decator is part of the stadium security detail at games in the stadium, also known as “The Big House.”

During time-outs and other breaks in the action, one of Decator’s jobs is to step out to the edge of the field and watch the crowd “to see if we find anything going on that shouldn’t be, which would be drinking and fighting, and let the guys with the radios know so they can get it taken care of.

“It’s sometimes easier to see from the field than it is from upstairs,” he said.

If he spots someone drinking, “They get expelled. It’s not allowed. We don’t sell it there. We don’t allow it there.”

In the past, Decator served as an usher.

“When I was ushering, you took the beer away, and security picked them up and out the door they went. We dumped a beer or two,” he said.

People are still going to try to sneak alcohol into the stadium.

“They’ll try to prove you wrong every time, but it’s not an everyday deal,” Decator said.

“It’s not a majority; it’s a minority of people that have to create that kind of problem.”

This year, the stadium opened after a $200-million plus remodeling project.

One of Decator’s jobs has been to keep the field-level area clear.

“This year, it’s been terrible,” he said.

There isn’t room for that many people, he said.

“The bands come down there with 400 or 500 people, and they take up one whole end. There’s no room for them either. It’s tough.

“But once you clear it off before kickoff, once those people are gone, you have it under control, and it’s not so bad.”

Since he only watches the crowd during time-outs and other breaks in the action, he gets to see the games from field level. In fact, he’s only 5 to 10 yards from the playing surface.

So he’s fairly close to the action?

“You can be. If you’re not paying attention, you can be real close. You have to pay attention to what’s going on.

“That’s why you watch a lot of the football, because you don’t want to get run over.”

Being that close to the field, Decator said he can hear the players’ pads hit when a play is run.

Since the renovation, crowd noise on the field is higher, but, “you can still hear the pads crack. You can hear ‘em halfway down the field when they hit good and hard.”

He said still photographers have to remain behind a line on the ground, back from the sidelines of the field.

Asked about the press photographers, Decator said, “I’ve never had a bad one. If they get bad, they know the alternative is to go back up the tunnel and out. Their alternatives are not real good,” he said.

Decator said he got involved in volunteering at The Big House through his son, John, who now lives in Monroe, Mich.,

“I talked to the guy in charge of the tunnel, and I said, ‘How do you get this job?’

Decator said he enjoys the work.

“You’ve got the people, you’ve got the fans, and you get a camaraderie with the season ticket holders that are there, day after day, year after year. You get to know who they are and you talk to them a lot.

“When I was an usher, there were probably 50 people you knew.

“Now I’m on the field, and there’s that many but they’re different.

“There’s all the photographers you know, because they’re always there, the same ones, so you have a rapport with people.

“And the players,” he said.

“It’s just a good atmosphere, and I like the bands– both bands. They always get good bands in there.

“Everything is just a unique experience, I guess you’d have to say. I’ve never been in anything like that before.

“You kind of miss it when it’s not there.”