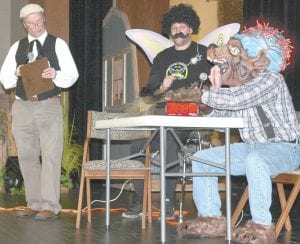 March 3. The theme for the event was “truthfulness.” To the delight of elementary students, the machine caught the Wolf telling several lies. Abraham Lincoln, U.S. president, was also questioned during the event, and was found to be truthful.– photo by David Pugh