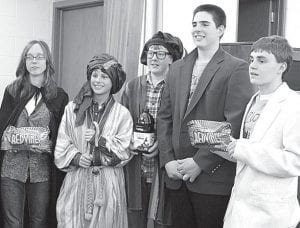 Zion’s “Magicians and Wise Men” won a prize for dressing up and mystifying the staff with their antics at the Bible Quiz meet, Sunday, Feb. 13. From left: Hannah Short, Josh Liechty, Gabe Short, Zach Zimmerman, Nathan Yoder. The team won both matches and averaged 135 points. Stan and Sue Short, parents of three Bible quizzers, and Ben Frey are the coaches.– courtesy photo

As the world’s eyes were on Egypt the last few weeks, area Bible quizzers were studying how God saved Joseph and his family by moving them to the land of Egypt, found in the last chapters of Genesis.

The fourth Bible Quiz meet took place at Lockport Mennonite Church, Sunday, Feb. 13. All 20 teams were invited to show team spirit by dressing up or acting out their team name.

“Team Rocksby” from Eastland Baptist was the top spirit team for leading the crowd in a musical rap about Joseph. Members are Michael and Robert Cooley, Allison and Michaela Kemp and Mitch Kuhn.

“Magicians and Wise Men” from Zion were awarded for entertaining the crowd with their “magic.” Members are Josh Liechty, Gabe and Hannah Short, Nathan Yoder and Zach Zimmerman.

“Vipers,” from Sonrise, also won a prize for donning a viper snake costume and slithering into the rooms. Members are Victor Arend, Kasen Culler, Kaleb Eisel and Jacob Hoffman.

“Fierce,” who also received honorable mention for their comic fierceness, was the top-scoring team of the day, averaging 172 points in three matches. Members are Ryan and Tony King, Philip Nafziger and Eliot Nofziger.

The next meet is at Zion Mennonite Church, Sunday, Feb. 27, 2 p.m. Plans are to quiz in five round robin groups of four teams each.