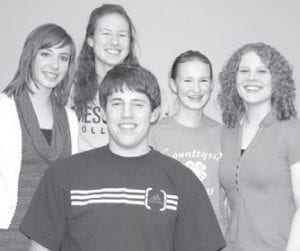 Having a great day quizzing at their home church, “Berg” from West Clinton scored 485 points in four matches to win a pizza certificate for the thirdhighest average score of the day. Team members are, front: Greg Waidelich; back row, from left: Sarah Aeschliman, Becca Short, Emily Short, Ellen Roth. Aeschliman, B. Short, Roth, and Waidelich, all seniors, started quizzing as seventh graders in 2005.– courtesy photo

“And God is able to make
all grace abound to you, so
that in all things at all times,
having all that you need, you
will abound in every good
work.”
II Corinthians 9:8

This was one of the memory verses quoted by Bible quizzers at the beginning of the Sunday, Feb. 28 matches.

The top two teams, “Simply,” Sand Ridge, and “Wild Beasts,” Lockport, kept their first and second places overall by winning all of their matches and finishing 17-0 and 16-1, respectively.

The race for third and fourth places was close. Four more teams had the possibility of finishing in the top four.

There were many close, exciting matches, going down to the last question. After going two years without any tied matches, the 2010 season had seven.

Traveling trophies for the highest-scoring teams of the day went to “Simply,” averaging 165 points, and “Faithful Children,” who played both “Simply” and “Berg” and still averaged 128.

“Berg” had all five quizzers quiz out in one match, and scored 485 points in four matches. Teams that won all three matches Sunday were “So-Called,” “Wild Beasts,” and “Simply.”

Taking first place for the day and season, “Simply” team members are Whitney, Collin and Alexis Stamm and April, Melissa and Galen Short.

Special highlights of the season: the most quizzers in five years, 91; the first time memory questions were used in 30 years, with 38 quizzers quoting verses and references; the highest number of long-term quizzers, nine of whom quizzed for six to eight years; a large number of rookies, 37; and over 50 volunteer staff and coaches.

The last chance to see local quizzing this year is the area tournament starting at 2 pm, Sunday, March 14 at Central Mennonite Church.

It is the heart always that sees, before the head can see.–Thomas Carlyle