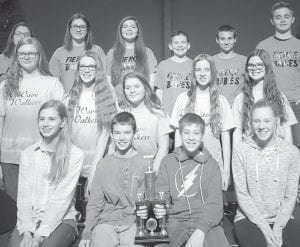 The match started “Huioi” taking the first seven questions and scoring 80 points with three question quizouts by William Nofziger and Levi Baus and an answer by Elijah Delgado.

“Grapes” came roaring back, scoring 115 points on the next nine questions, which included a 20-point team bonus for having four teammates answer. That blitz saw Levi Myers quiz out with teammates Bekah Liechty, Kelly Miller and Peyton Miller all scoring.

After a time-out and down 35 points with only two questions left, Delgado scored on the 17th question, setting up teammate Brayden Tilley with one last chance to score 30 points with a team bonus, which he did, winning the match 120-115.

Rookie cookies were given to 20 first-time quizzers, and prizes were given out to the five top-scoring teams of round robin quizzing and individuals who read through Matthew 1-8 at least 10 times, memorized at least 10 verses, or who have been in quiz more than five years.