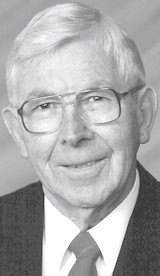 Bernard J. Ryan, 89, of Defiance, passed away on Monday, Feb. 29, 2016, at Twin Rivers Care and Rehabilitation Center in Defiance.

He was a member of St. Michael’s Catholic Church and the Holy Name Society. He was an active communion lay distributor and lector.

Bernard owned and operated Ryan Implement John Deere Sales in Jewell, then he worked at Liechty Implement in Archbold and Archbold Equipment, selling farm equipment for over 40 years.

He was a member of Jewell American Legion, Defiance Elks, Knights of Columbus, and was an Adams Township Trustee. Bernard also loved to farm.

He was preceded in death by his parents, wife Ann Ryan, daughter Janet McCloud, and sister Joanne Davis.

Memorials are suggested to Defiance County Hospice or to St. Michael Catholic Church.

Schaffer Funeral Home, Defiance, was entrusted with the arrangements. Online condolences can be given at www.Schafferfh.com.