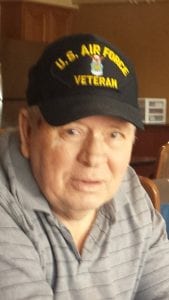 Bernard J. Layman, age 73, of Archbold, passed away Thursday, Jan. 11, 2018, at Addison Heights in Maumee.
Prior to his retirement, he had worked at the Wastewater Department for the Village of Archbold for 29 years.
Bernard was born in Swan Creek Township, Fulton County, on Jan. 16, 1944, the son of Herthal and Alice (Flory) Layman.
He married Lois Forrest, and she survives. He was an Air Force Veteran.
He was a member of St. Peter Catholic Church in Archbold for over 50 years. He was also a lifetime member of the Archbold American Legion B.L.W. Post 311 for 50 years, where he had served as past Post Commander.
He was also a lifetime member of the Archbold Knights of Columbus.
Surviving, besides his wife, Lois, are children, Carla (Frank) Crespo and Rebecca (Richard) Creque; grandchildren Brittany (Dexter) Engel, Brandon (Adriana) Minck, Tate Thiel, Drew Thiel and Hunter Thiel; great-grandchildren, Keirstin Engel, Ava Engel, Bently Engel, Azalea Minck and Brolin Minck. He is also survived by his siblings, James (Kris) Layman, Jane (Thomas) Buehrer, and Bernadine Bott.
He was preceded in death by his parents.
Visitation for Bernard will be held from 12 noon until 2 p.m. on Friday, Jan. 19, 2018, at St. Peter Catholic Church in Archbold. Memorial Mass of the Resurrection will immediately follow at 2 p.m., with Father Stephen Stanbery, officiating.
Following the service, veteran services will be accorded by members of the Archbbold Amercian Legion Post. Interment will be in the St. Peter Cemetery.
The family requests that memorial contributions be given to St. Peter Catholic Church.
Online condolences may be offered to the family at www.grisierfh.com. Grisier Funeral Home in Archbold has been entrusted with arrangements.-Posted 1.14, 2:45 pm