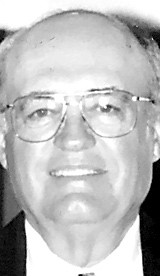 He married Lois J. Traut, his high school sweetheart, on March 25, 1951, who survives in Archbold.

Ben attended school in Stryker and Napoleon, and graduated from Archbold High School in 1950. He later attended Miami University, received his bachelor’s degree from Defiance College, and his master’s degree from the University of Toledo.

Ben’s major vocation was as a school teacher and an elementary principal. He worked at Wauseon Schools, Franklin Township (Zone) School, and then retired from Toledo Public Schools.

Earlier jobs included being a surveyor during the construction of the Ohio Turnpike, a miller at Elmira Elevator, and farming with father-in-law Joseph Traut.

Ben felt that one of his main purposes in life was to make people smile and laugh– whether at him, with him, or because of him– it made no difference.

It was Ben’s wish to be an anatomical donor for medical research at the Medical School of the University of Toledo. Memorials, etc. may be directed to St. James Lutheran Church, Archbold, OH, or St. Paul’s Lutheran Church, Hillsdale, MI, or a charity of the donor’s choice.