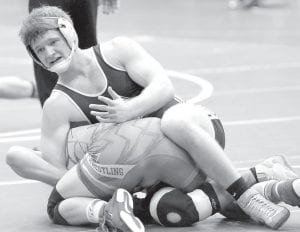 David Bell looks for advance from his coaches in his semifinal match with Milan Edison’s Sam Stoll. Bell defeated Stoll in a 4-0 decision. The AHS senior finished second.– photo by Mario Gomez

Noah Mattin and David Bell placed in the top four at the district tournament at Toledo Waite High School, Friday and Saturday, Feb. 26-27.

Bell was the highest-place finisher for Archbold, finishing second at 170 pounds. Mattin placed third at 126 lbs.

“Congratulations to both of them,” said Brian Becher, AHS head coach. “Getting there, obviously, is a big accomplishment.”

Bell, a senior, took advantage of his sectional championship and tournament draw to make it to the championship finals and punch his ticket to the state tournament.

In his opening match, Bell disposed of Ashland Crestview’s Cade Rogers with a fall in 35 seconds.

Bell decked Trevor Mack of Northwood in 3:01 to advance to the semifinals, where he faced Milan Edison’s Sam Stoll. 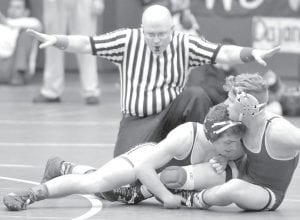 Noah Mattin appears to have control for a takedown against Sandusky St. Mary Central Catholic’s Dominic Rosin, but the referee thinks otherwise. Mattin won a 7-2 decision in the match. The AHS junior finished third.– photo by Mario Gomez

Points were at a minimum, but Bell scored enough to defeat Stoll 4-0 to wrestle for the championship.

Sycamore Mohawk’s Cole Draper defeated Bell 7-2 in the finals to win the championship.

“It feels good,” said Bell. “I’ve been working four hard years, long years, just to finally make it down there. It’s been tough.”

“Bell had two big wins (Friday) night to get into the semifinals,” said Becher. “He had a close match with the Stoll kid from Edison.

“I’m sure he was nervous, never having qualified before.”

After an absence from wrestling last season, Mattin came into the district tournament looking to return to the state tournament.

Trevor Bingham of Elmwood was no problem for Mattin in his first match, as the junior defeated the Royal with a 24-second pin.

Mattin defeated Dylan Hammond of Hopewell- Loudon 3-1 in the quarterfinals.

In the semifinals, Mattin was on the losing end of a 5- 1 score against Northwood’s Jonny Wheeler.

Wrestling in the consolation semifinals, Mattin dominated Dominic Rosin of Sandusky St. Mary 7-2 to reach the finals and qualify for state.

“I was kinda disappointed last year that I didn’t get to try and make the trip down, but this year it feels good making it,” said Mattin.

“We knew Noah was gonna have a tough match in the semifinals with the Wheeler kid,” said Becher.

“In that go-to match he finally wrestled like he was a month ago, and being offensive and moving his feet. He got a big win in the third-place match, as well.

As a team, the Blue Streaks tied with Ayersville for 11th place, scoring 49 points.

Delta was the district champion with 233 points.

Oak Harbor was second with 174, followed by Milan Edison 149, Genoa 139 and Sandusky St Mary 78 rounding out the top five.