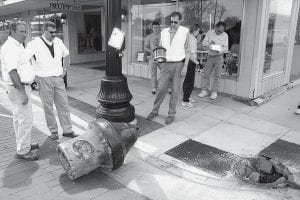 Representatives of the Archbold Engineering Department look over the bell bollard which was pulled from its underground concrete foundation by a semi truck, Monday afternoon, May 5. From left are Chuck Lehman, project representative, Bob Seaman, village engineer, and Jon Block, engineer. Behind Block, from left, are Daniel Beck, Archbold, Tera Rogers, Archbold Police officer, and Randy Nofzinger. Beck and Nofzinger witnessed the incident. The driver of semi rig said he did not notice his truck had hit the bollard.- photo by David Pugh

Usually, when a semi truck goes up against one of Archbold’s bell bollards at the intersection of North Defiance and Stryker streets, it’s one for the bollard.

That wasn’t the case Monday, May 5, when a semi rig ripped out the bell bollard at the southwestern corner of the intersection at ground zero, then continued on.

Martin Schmidt, Archbold Police chief, said Elmi Obsieyeh, 51, Columbus, denied knowing he had caused any damage after the truck he was driving, owned by Select Carrier Group, Groveport, knocked over the lighted, decorative bollard, pulled the approximately 400-pound castiron bell bollard out of the sidewalk, and damaged the traffic signal pole.

The truck driver left the scene of the accident, heading south on South Defiance Street.

Witnesses at the crash scene reported hearing the noise. Randy Nofzinger, Pettisville, was in front of the truck when it happened. He said he heard a sound, “like something falling over inside a semi trailer.”

His passenger, Daniel Beck, Archbold, said he looked in his rearview mirror and spotted the truck against the traffic signal pole.

Nofzinger thought at first the truck would stop; but when the driver couldn’t find a convenient place to pull over, kept going.

Based on descriptions given by Nofzinger, Beck, and other witnesses, Archbold police officers issued an all-points radio bulletin to neighboring law enforcement agencies, seeking the truck.

In the meantime, officers contacted the trucking company. Company officials determined which one of their trucks were in the Archbold area, then called the driver, telling him to return to Archbold.

After Obsieyeh arrived in Archbold and spoke to officers, he was issued citations for making an improper turn, leaving the scene of an accident, and driving a vehicle over 65 feet long.

When asked if he believed a truck could rip a bell bollard out of the ground unknowingly, Bob Seaman, village engineer, just laughed.

The bollard is actually hollow. There is a hole in the base which is filled with concrete, so it becomes part of the concrete foundation.

“It would take a substantial amount of force to pull it out of the ground. I’m surprised it could be pulled out by a truck,” he said.

As of Tuesday morning, Seaman said a complete assessment of the damage had not been made. In addition to the damage to the bollard, sections of the concrete sidewalk were buckled and cracked, and handicapped ramps must be rebuilt.

The push button crosswalk signal, and its sign, were also damaged; those items will have to be replaced.

Seaman said the bollard foundation will have to be dug out and replaced.

In the meantime, the hole left by the bollard and the removed section of sidewalk have been temporarily filled with stone.

It could take weeks to repair the damage.

It is not known if the bollard can be reused, because the base is still filled with concrete. If village street department workers attempt to jackhammer out the concrete, it might destroy the cast-iron bollard.

Seaman was unwilling to speculate cost of the damage, but Dennis Howell, Archbold village administrator, believes it will exceed $10,000.

Seaman said there is a “better” phase two bollard that can be installed. There is nothing taller, heavier, or stronger.

One option would be to use several bollards, as the city of Reynoldsburg, east of Columbus, did, to protect its intersections.

Archbold can’t follow Reynoldsburg’s example, because it does not have the room at the intersection.

Brett Luzader, assistant street superintendent of Reynoldsburg, said their bollards have been in place about five years.

They’ve never had one ripped out of the ground.

“We had the top broken right off of one, but we’ve never had one ripped out,” he said.

“The one that was broken had been in the ground less than two years. We are not sure what happened to it,” he said.