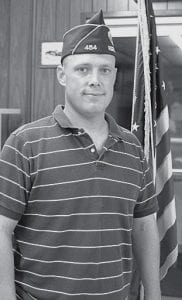 When terrorists attacked America on Tuesday, Sept. 11, 2001, like millions of other Americans, Josh Behnfeldt was on the job.

An Air Force engine mechanic for F-16 fighter jets, the Ridgeville Corners resident was working at the Ohio Air National Guard base at Toledo Express Airport.

During the week he is a federal employee for the Department of Defense; on weekends, he’s “military.”

Watching television coverage of the hijacked planes flying into the World Trade Center and the Pentagon in Washington, D.C., “a lot of us thought it was a TV show,” he said. “We didn’t know what was going on.”

Fighter jets scrambled from the base in Toledo, ready to intercept a fourth plane. It was United 93, which crashed into a field in Pennsylvania after passengers tried to take back control of the aircraft after it, too, was hijacked.

He returned in July from a second tour of duty in Iraq, and spoke of his experiences to veterans of the American Legion Ward L. Adams Post 454 in Ridgeville Corners, Tuesday Sept. 11, the sixth anniversary of 9-11.

“That’s why I like to do this, because it helps people remember why we’re over there,” he said.

“That’s what I believe in, as a Christian. I believe that God wants us to make this world a better place.

“A lot of people have a lot of animosity for our government being over there, because they feel we shouldn’t be sticking our nose into it.

“I’ve made a oath to serve this country, and I will do whatever I’m told because I believe in the President of the United States.”

During his second tour, Behnfeldt, a technical sergeant, was stationed for a month at Balad Air Base in Balad, Iraq, with the OANG’s 180th Fighter Wing, which is based at Toledo.

In 2006, he spent about six weeks in Qatar, a country about the size of Vermont and New Hampshire combined, south of Iraq.

At Balad, temperatures reached 120 degrees during the day. But “it’s a dry heat,” he said, as the veterans laughed.

The temperature dropped to about 90 degrees at night, and “that felt good.”

“We were mortared (coming under insurgent mortar fire), but it wasn’t to the extent where you would be in fear all the time,” said Behnfeldt.

“They just (fire) ‘hail Marys’ at you every day.

“The F-16s are like vacuum cleaners. There’s a lot of FOD (foreign object damage)…they suck up stones. It’s really hard on our motors.

“Luckily we didn’t have a lot of problem with this, because we constantly sweep” the runways at the base.

At Balad, the soldiers live in 40-foot trailers that are sectioned off into three rooms, with an air conditioning unit in each room.

“Four guys in each room- it gets pretty bad sometimes, especially when your AC unit goes down,” he said.

The food is “excellent. They had steak every Thursday, and they always had taco buffets. The grub is always good.”

While Behnfeldt didn’t have much interaction with Iraqi civilians, “there’s a lot of awesome things going on over there, and I got to see that.

“The best surgeons in the world are right there. You’ve got people coming over, volunteering, to operate on our soldiers.

“Our medical facility not only takes care of the insurgents that shoot at us every day that we injure or bring in, but we also take care of the civilians that get injured.

“That’s impressive to me, that our government takes people in, takes care of them, fixes them up, and lets them go.”

“I’m just a mechanic. I’m in the Air Force, but those guys over there are working their butts off. They’re doing their job, and they’re protecting not only that base, but they’re keeping things from over there coming here.”

While Behnfeldt was in Iraq, his wife, Jennifer, and two children, Zane, 4, and Kaylen, 1 1/2, were showered with support back in Ridgeville Corners.

“The support I had back home from the Ridgeville community, from Adams Township… it’s just unbelievable the support that my wife and my kids had,” he said.

“People would stop in and check on her, see how she’s doing. Her parents (Rick and Suzette Hamlin) live two houses down, and that makes it nice.

“It’s nice to see people caring about people. That’s how Ridgeville is. Everybody takes care of everybody.”

“All I can say is, keep praying for the men and women that are over there, every day. I do, because they’re the ones that are doing all the work.”