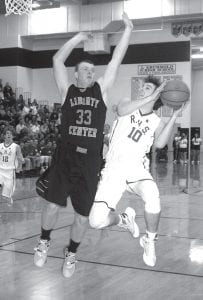 It was a brisk winter night for “Ridgeville Falcons Night,” Friday, Feb. 5, in the Thunderdome, as the Archbold boys basketball team played tribute to the former Ridgeville High School by donning the royal blue and white uniforms of the Falcons.

Cheerleaders, coaches and fans all came out in support of the school that was consolidated into the Archbold Area Schools in 1969, and it was the Falcons who notched the 57-53 win over Liberty Center.

After 14 first-quarter points from Kaiden Bedsole, the Falcons held off a late fourth-quarter LC run to stay perfect at 6-0 in the Northwest Ohio Athletic League and raise their record to 11- 6.

“We had to hold Liberty off down the stretch, which was no surprise,” said Doug Krauss, Falcons head coach.

“I have seen Liberty play a few times. They came out that second half and turned the heat up, and we just kind of slogged our way through it.

“This was a huge win and puts us in a pretty good spot.”

A back-and-forth first quarter had the Tigers (7-10, 3-3 NWOAL) jumping out to a 5-1 lead before Bedsole drained his first of four three-pointers in the quarter.

Derek Walker added a deuce and the Falcons took a 6-5 advantage that was short-lived as Zack Carpenter nailed a jumper for LC.

After LC’s Blake Graber hit a bucket, Bedsole polished off the quarter with a deuce for a 17-10 Falcon lead.

Bedsole scored 11 straight points in the first stanza and finished the quarter with 14 of Archbold’s 17 points. He led all scorers with 21 points on the night.

“We always tell the kids (to) make one more pass. Tonight they did that, and Kaiden (Bedsole) was getting good looks,” said Krauss.

Ridgeville outscored its counterpart 17-11 in the second period for a 34-22 halftime lead.

Down 39-23 in the third period, the Tigers started chipping away at the Falcons’ lead.

Carpenter hit a pair at the foul line; Derek Walker answered for the Falcons.

The Tigers tallied the next five points and finished the third quarter outscoring their host 13-10, but still trailed 44-34 to start the final eight minutes.

Justin Saneholtz jump-started LC in the fourth with a three, which started an 8-0 run to close the difference to 44-42 just minutes into the quarter.

The two squads exchanged buckets until the 2:27 mark when Brooks Hinton gave the Tigers a 50-48 lead on a pair of free throws.

Cash Gericke and Bryce Williams hit on back-to-back baskets while Mike Weigand converted a Tiger turnover into two for a 54-50 lead with 1:22 remaining.

Graber buried LC’s last field goal, a three, to close the deficit to 54-53.

After Williams hit a pair of free throws for a 56-53 lead, Hinton drove the lane for two but came up short as Ridgeville’s Toby Walker came up with the missed shot and was fouled.

Shooting the double bonus, Walker missed the first foul shot but canned the second as the Tigers’ upset bid came to a close.

Carpenter paced the Tigers on the night with 16 points. Blake Graber canned 15.