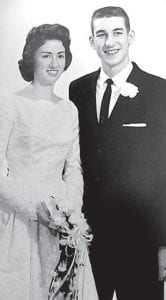 Merle Beck and Marlene Beck, Pettisville, were married Dec. 22, 1962, by Charles Gautsche in the Pettisville home of the bride’s parents.

They are celebrating their 50th anniversary by taking their children and grandchildren on a cruise to Mexico.