Beck + Mansfield = Success In The Classroom 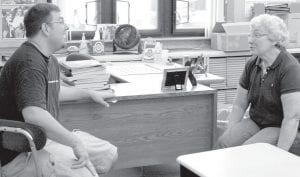 Jason Waldvogel, Pettisville elementary principal, told the Pettisville School Board on March 10 that Mary Lou Beck “cares about kids, and spends her own time to make sure the students are taken care of.” Beck, who retired this year after 22 years with the school district, also spends her own time making sure the teacher who filled her position is taken care of. Above, Beck shares her wisdom with Jason Mansfield, the new fifth and sixth grade math teacher, in her old (and his new) classroom on Friday, Aug. 6.– photo by Mary Huber