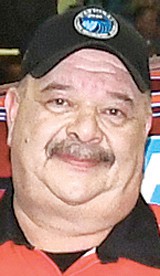 Mike Beck, Ridgeville Corners, won his class in what is known as “The Daytona 500 of Tractor Pulling,” Saturday, Feb. 16, at the National Farm Machinery Show in Louisville, Ky.

While the tractors may be called Super Stock, there’s practically nothing stock about them.

“I tell people when I was a kid, we used to take the farm tractor to the fair,” Beck said.

In tractor pulling, a tractor is hitched to a weighted sled comprised of a set of wheels at the back and a large metal plate or pan. Attached to the wheels and the pan is a weighted box. 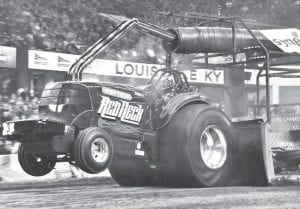 As the tractor moves down the dirt track, the weighted box moves forward, putting more weight on the pan, making it more and more difficult for the tractor to pull.

“You either have to be a state champion, a past champion, or a champion of some type just to get down there,” Beck said.

“It’s an invitation-only type deal. It’s the highest-paying event that we pull all year long.”

The engine in Beck’s tractor had its origins in the International DT 466, a 446-cubic inch, six-cylinder diesel.

For many years, it was the workhorse engine for the company.

As delivered from the factory, it was rated around 125 horsepower.

Beck’s engine is an aftermarket version based on the 466. In competition form, it now boasts 540 cubic inches.

A big factor in diesels is a turbocharger, which uses exhaust gases to spin a turbine, compressing air so more can be pushed into the engine for more power.

A stock tractor will have one turbo that provides 15 to 20 pounds per square inch of “boost.”

“When we’re all done, these tractors are running close to 300 pounds of boost,” he said.

An engine similar to Beck’s was tested on a dynamometer.

The clutch setup in Beck’s tractor is far from stock.

In fact, Beck works with Kalitta Motorsports, the operation of Connie Kalitta, a drag racing legend.

“We go up there, we use their clutch grinders to grind our clutches. They’re always giving us tips and pointers on how to set clutches up and things,” Beck said.

The Louisville tractor pull is indoors.

A dirt track about 245 feet long, which reuses the same dirt every year, is laid on an arena floor.

Tractors must first qualify, whittling 11 tractors in the 8200 class down to six. During Friday night qualifications, Beck was the last tractor to pull, “and if I didn’t make 220-some feet,” he would not make the cut.

“We actually made 232 feet. We were in the top three,” good enough for a podium finish.

For the Saturday night championship, “there were six of us. I was the third tractor to hook (to the sled). Everybody ahead of me was leading.

“When I hooked, I took the lead, and no one ever got around me.

Beck refers to touching the brakes, because that’s how a tractor is steered. When the tractor goes down the track, the front wheels are off the ground.

“The ideal thing is to have your front wheels between six inches and a foot off the ground,” he said.

“That way, you have perfect weight transfer to make the tractor what we call ‘hook up,’ so you can get a hold of the track, get some traction.”

Winning the Louisville event is a great thing to put on a resume, “because it’s so hard to win down there,” he said.

“Think about this. Between the top distance of 238 (feet), the next was 237. There was less than a foot and a half distance.

“To get that close, it tells you how close the competition really is.”

Beck’s tractor is relatively new, with several innovations in its design.

“A lot of the things we put on this tractor, they said wouldn’t work,” he said.

“We’ve got things working. We want to play with this a little bit.”