Becher Welcomes Back Eight On The Mats 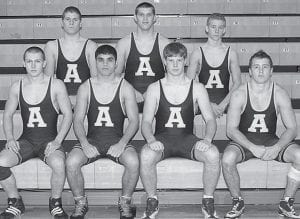 “Even with those eight,” he said the team will be inexperienced when the season starts, because only five of the eight qualified for district tournament.”

Returning for the Blue and Gold:

“We will have many wrestlers in our lineup that do not have varsity post-season experience,” said Becher. “But we also have some guys that we expect to be competing in Columbus at the end of the season.”

“Our inexperience should be negated prior to the post-season with us having so many matches on our schedule against quality opponents.”

He expects Liberty Center to be at the top of the pack in the Northwest Ohio Athletic League, followed by Delta and Bryan.

The Streaks open the season, Thursday, Dec. 11 with a home match against Bryan and Delta.