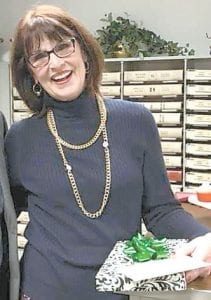 A Fulton County public servant left her office for the final time on Dec. 31, 2018.

“I started in 1996,” Barber said. “It’s been a real joy to be a part of Fulton County government.

“I always enjoyed the job. It’s a very detailed job. It was fun.

“From a historical perspective, I liked helping people research their property. I enjoyed working with the public.”

The county recorder office serves as a place to record everything to do with real estate transactions.

“A lot of people get it confused,” she said. “People will call in thinking they’re reaching the clerk of courts because it says records.

“Actually, the county recorder office is a county office where deeds are filed, mortgages are filed, leases are filed, liens are filed– federal tax liens, and we have some state liens like premium dues, unemployment liens.

“What we do is also a way to protect a buyer who wishes to purchase property.

“When a property is purchased, a title examiner comes in (to our office) to make sure there are no liens against the property, or any problems with it.”

“I loved the history part of the job,” Barber said.

“You can go back to the 1800s and find out who owned the property before you. A lot of people enjoy doing searches on property they own.

“We have people come from out of state who had (Continued from first page) relatives in our area and are looking for their family roots. Schools sometimes bring their government classes in.

“We are very lucky in Fulton County that the elected officials work extremely well together.

“Through my association, the (Ohio) Recorder’s Association, I would hear these horror stories of how they were having difficulties with the commissioners, or the auditor, and they weren’t speaking to one another. We don’t have that.”

The county recorder is an elected position with a fouryear term, much like other county offices.

“That’s set up by our legislature and our constitution,” Barber said.

Barber is the chairman of the Fulton County Republican Party Central Committee. She has held the post since 1982.

“I’ve always been active politically. I have a passion for it, and my philosophy just falls in line more with the Republican Party,” she said.

“A lot of my family members were Democrats back in the ‘50s. It’s amazing; they’ve all seen the light, and most of them are Republicans now.

“I was named as the Republican Chair of the Year for the state of Ohio” last summer.

“I went down for the presentation, and (Donald) Trump (US president) was the speaker in Columbus, so it was really quite an honor.”

By law, every county has precincts.

Each political party elects a county central committee member from their precinct.

Fulton County has 36 precincts, which Barber expects to be cut to 33 or 34 in the near future.

As committee chair, “you are responsible for the political activities, the political strategy, the fundraising to keep your party moving in the right direction. It takes work,” she said.

“That’s pretty much how both parties work.

“We should be very happy with the way the board of elections is run in Fulton County. There’s a case in point of two political parties working together to have a positive outcome, and they certainly are doing that.”

“A lot of people thought I retired with him. I kept hearing, ‘How do you like your retirement, Sandy?’ I said, ‘I’m not retired!’

“Some friends told me, ‘You’ll know when it’s time.’

“I’ll be 72 in May, and there are some things that my husband and I would like to do– some traveling, visiting our children who are scattered all over.

“I thought about it and I thought, ‘You know, we never know how long we have on this earth. Maybe it’s time.’

“I’m glad I did. I think it was a good decision. I have not regretted it,” she said.

“I’ve got a number of projects at home I’ve looked the other way all these years and haven’t taken care of. I’m having lunch with friends I’ve put off.”

While she’s retired as county recorder, she has been unable to leave the central committee post.

“I retired twice. Whatever the circumstances for those who took the chairmanship, they just were not able to stay on,” she said.

“They had young families and they found out it was pretty time consuming.”