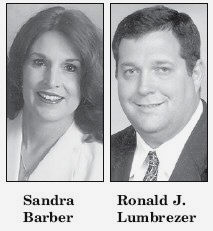 Barber said she’ll still work with campaigns from time and offer political advice to those who ask for it.

But she said she’s reached a point in her life where she wants to do a little traveling with her husband, and enjoy their good health.

“It’s time to turn it over to a new generation. R.J. has a good political head on his shoulders, and his political philosophy fits with the Republican party,” she said.

Barber said she became interested in politics in school.

“I love history and government. As I became more acquainted with the political parties, my personal philosophy was more in line with the Republican party,” she said.

While in school, she attended Buckeye Girl’s State, an awayfrom home program that teaches government and the political system.

Barber said she knew four years ago that she wanted to retire. After this year’s March primary, she officially stepped down.

Some high points of her political experiences revolved around Ronald Reagan.

“I was a great supporter of Ronald Reagan. I supported him when he first ran (for president).

“I’m an admirer of his political philosophy. He was a wonderful communicator.

“During the 1984 convention, I was able to meet him, and met him several times during the campaign.

“I’ve had the opportunity to meet so many wonderful people- presidents, vice presidents, people who hold high elected offi ce. It’s been a real experience, and a good education as well,” she said.

She said the Watergate era (in the early 1970s) was a diffi cult time.

“It was a tough time, but the party regrouped,” she said.

“In the last (gubernatorial) election (in 2006), there was the problem with ‘Coingate.’

“That was not pleasant,” she said.

Barber commented on the lack of civility in today’s political scene. Attacks by one party on another are more personal, and there are fewer and fewer compromises.

She said O’Neill was a well- known liberal, while Latta was a strong conservative.

Yet O’Neill told her he and Latta would work together on legislation, and Latta’s word was as good as gold.

Despite the fact the two were philosophically at opposite ends of the spectrum, the two had great respect for one another, and enjoyed each other’s company.

Lumbrezer said he has been a member of the Fulton County Republican Central Committee since 2000, when he took his father in-law’s spot.

“I believe in, and support, strong leadership. Conservative leadership.

“I want to be involved.”

He said the county GOP’s first responsibility “is to help get Dean Genter reelected” to the post of Fulton County commissioner.

He is also looking forward to a redesign of the Fulton County Republican Party website, with a possible electronic newsletter.

Lumbrezer said he’s excited about the central committee, which has many new conservative members.

The group will support lower taxes, business, pro-life issues, and the second amendment.

Lumbrezer is also a Royalton Township Trustee, a post he has held for seven years.

He is also a member of the Ohio Township Association State Board.