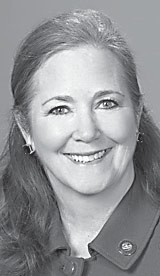 Barbara R. Sears, state representative (R) for Archbold and most of Fulton County, will leave her post to take a job in state government.

She will serve as the assistant director to the Governor’s Office of Health Transformation.

Office of Health Transformation initiatives include modernizing Medicaid, streamlining Health and Human Services, and restricting the way the state pays for health care.

She starts her new job July 1.

Sears was term-limited, with her current term expiring at the end of this year. She could not seek reelection.

Carolyn Best, a spokesman for Rosenberger, said there are no plans to replace Sears.

The 47th Ohio House District covers the northern and western three-quarters of Fulton County, including Wauseon, and western Lucas County, excluding the city of Toledo.