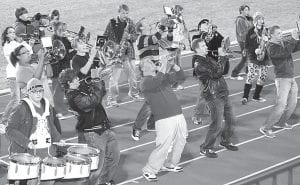 Members of the Archbold High School Marching Band perform during a March-a-thon to raise funds for a March 21-23 trip to Toronto, Canada. The band collected pledges based on a twomile march around the AHS track. Tim Booth, director, said the band did traditional and non-traditional marching, Thursday, Oct. 11.– photo by Rita Bilen