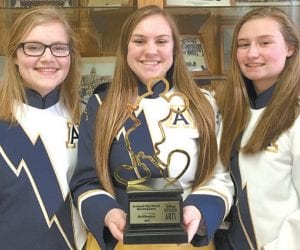 Darby Stevens, Emily Rose, and Kenzie Short, AHS marching band field commanders, from left, hold the Disney Performing Arts trophy for participation the band received for marching in the Magic Kingdom parade. While they had fun on the trip to Disney World in Florida over spring break, band members said they learned lessons about music and life.– courtesy photo

Sure, it was a lot of fun to go to Florida and spend time in the Disney World theme parks.

But three members of the Archbold High School Marching Band said their spring break trip was a learning experience, as well.

In addition to marching through the giant theme park, the students spent time playing with a Disney clinician, who showed them how music is matched with movie images.

Emma Cobb, a senior, said the lesson she took away from the clinic with the Disney clinician was, “You can always improve something. He said that a lot.

“Is the music perfect now? No. Can we make it better? Yes. Will it be perfect then? No, because there’s always something to fix. That’s the main thing I took away from it.”

Michael Short, a junior, said he agreed with Cobb, but added, “We also learned we have to work together to achieve a sound. It can’t be one person trying; it’s collective. Everyone in the band works together.”

Members of the Archbold High School Marching Band take time out for a picture while waiting for the fireworks to start on the night of their first day at Walt Disney World. The trip to Florida, held over spring break, included fun and educational activities.– courtesy photo

For Emily Rose, a senior, the trip “confirmed the fact that we are a really good band, we’re a really decent band, and if we work hard enough, we can get a really great sound out of our band.”

At one point, Rose said the clinician recorded the band, then played the recording.

“It was like, ‘Is that really our band?’ We sounded really good!” Rose said.

“We played through a few songs with him, then we would fix it, and we would go back and play it again.

“Then our final clip– it was animation from the end of “Frozen” (a 2013 Disney film)… and he synced it up with what we just played. It was really neat. We got to watch it at the end” of the clinic, Rose said.

Short said the music they played with the clip from “Frozen” was “real nice.”

It wasn’t all work.

While it rained on their first day, Cobb said, “We went to Epcot, then we went to Hollywood Studios, and then the Magic Kingdom, and we had the whole day to ourselves. We checked in with our chaperones every few hours.

“You had to send them a selfie every so many hours to make sure you were with the group,” Rose said.

Would the chaperones send selfies back?

On their last day, the band marched in Disney’s traditional parade.

Cobb said she thought the experience was fun.

“It was fun to see all the people cheering for us and taking pictures. People who didn’t even know us were saying, ‘go’” and then name a certain instrument.

“I heard someone make a comment about being professional,” Short said.

“I think that would be a boost to anyone.”

“It was a really neat experience, when you come around that big turn and you see the castle (Cinderella’s castle). It’s so big and so close,” Rose said.

“I think it was a really good experience– to represent the band.”

The band traveled to Florida by charter motor coaches (buses). The trip down took 22 1/2 hours; back was almost 24, the students said.

What does one do on a bus for that many hours?

“On our bus, we watched a lot of movies. There’s a lot of people playing card games, and a bunch of talking,” Short said.

Cobb said a group played a game using their phones.

Did anybody get any sleep?

“(On) some charter bus trips, the floor of the bus is actually more comfortable than the seats,” Rose said.

While it rained the first day, the students said they got to enjoy some of Florida’s trademark good weather.

“It was so nice the last day,” Cobb said.

“It was really sad to watch the temperature drop as we went north.

“Then it just snowed all weekend, so that was great to come home to,” Rose said.

The lessons the trip taught weren’t just about music.

“I think we learned more about ourselves, the band (as a group), and we created a stronger bond, especially on the bus ride,” Cobb said.

“I agree with Emma,” Short said.

The trip helped band members strengthen their relationships, he said, adding, “There weren’t a whole lot of problems.

“We all got along together, and we had a great time.”