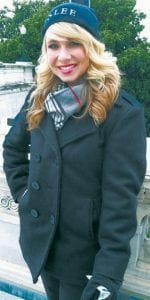 Mayer models the peacoat, hat, and gloves the choir was given for the Inauguration.– courtesy photo

Some always knew that Bailey Mayer’s musical talents would take her places.

And they did, right to Washington, D.C., where she performed as a member of the Lee University Festival Choir during the second inauguration of Barack Obama, U.S. president, Monday, Jan. 21.

The 2011 AHS graduate had a seat no more than 50 feet from the inaugural platform, where she was able to observe the swearing-in ceremony and other performances.

Mayer admitted that during one of the choir’s songs, she looked out at the huge crowd, became emotional, and cried.

“It was a once-in-a-lifetime experience,” she said.

During her time at AHS, Mayer was a music and drama standout.

In addition to singing with the All-State Choir, she performed in AHS productions of “Joseph and the Amazing Technicolor Dreamcoat,” “The Butler Did It,” “The Music Man,” and “Oklahoma.”

Left: Bailey Mayer stands in front of the U.S. Capitol building. She was a member of a 200-voice choir from Lee University who sang during the presidential inauguration. Right: a photo taken from the spot where the choir sang. She said she was just about 50 feet from Barack Obama, U.S. president, as he took the oath of office.– courtesy photos

When it came time to select a college, her church pastor recommended Lee University, an approximately 5,000-student private Christian college in Cleveland, Tenn., only 10 minutes from the Georgia state line– but almost 10 hours from Archbold.

While majoring in communications with an emphasis in advertising, she remains involved in music by singing with a small ensemble on campus.

In October 2012, Lamar Alexander, U.S. Senator from Tennessee (R), spoke during chapel services at the university, and announced Lee students had been invited to sing at the inauguration.

Nine songs were selected for the inauguration performance: seven sacred songs, plus “God Bless America” and “This Land is Your Land.”

During the performance, there was only time for six.

The singers were provided with money for meals and allowed to sightsee on Saturday, after practicing and going through security.

Mayer said she took in the Lincoln and Washington memorials, the Smithsonian, National Archives, and Library of Congress.

Sunday, they were back on stage in front of the capitol building for a sound check.

“It took 2 1/2 hours to get all of us through security. We were only allowed to bring a cell phone and the clothes on our backs. There were a bunch of metal detectors,” she said.

“Once through (security) we were called a ‘secure package.’ We had to stay together. We could only go to the bathroom in groups, with an escort.”

There was another rehearsal; then they went to their seats.

It was cold outside, but the Inauguration Committee provided each singer “with really warm coats, hats, and gloves, and we got to keep them. I still have mine,” she said.

Additionally, there was a “care package” with hand warmers and lip balm.

The Lee singers performed about one hour prior to the inauguration. They were preceded by students from a local school, and followed by the Brooklyn Tabernacle Choir.

“We got to sit and watch the inauguration and all of the events. We were 50 feet away from Obama,” she said.

“The actual experience (of singing at the presidential inauguration) was incredible. I’m sad it’s over, but glad it happened,” she said.

Beyonce’s performance became a center of controversy when it was later revealed she “lip synched” the national anthem.

In other words, she sang along while a recording of her voice was played over the public address system.

Mayer said she was behind Beyonce, but it didn’t appear to her she was breathing as she would if she were really singing.

The Lee University Festival Choir did not lip-sync, she said.